Letter to a Christian Nation - Part 2 - Inquisitions and Heretic Burnings

. . . You probably think the Inquisition was a perversion of the “true” Christianity. Perhaps it was. The problem, however, is that the teachings of the Bible are so muddled and self-contradictory that it was possible for Christians to happily burn heretics alive for five long centuries. . . . (page 11)

It is true that many have done evil in the name of Christianity. But were these actions done at the behest of Christianity’s founder? The honest examiner should first ask, “Did Christ or His apostle advocate the “wholesale murder of heretics, apostates, Jews, and witches?” (pg. 12)

Who Bears the Sword?

Are they then also to be admitted to this Supper, who show themselves to be, by their confession and life, unbelieving and ungodly?

No: for by this the covenant of God is profaned, and His wrath provoked against the whole congregation; wherefore the Christian Church is bound, according to the order of Christ and His Apostles, by the office of the keys to exclude such persons, until they amend their life.

If they still refuse to repent of their errors they are removed from the church through excommunication. Again from the Heidelberg Catechism (Q and A 85) . . .

How is the kingdom of heaven shut and opened by Church Discipline?

In this way: that according to the command of Christ, if any under the Christian name show themselves unsound either in doctrine or life, and after repeated brotherly admonition refuse to turn from their errors of evil ways, they are complained of to the church or to its proper officers, and, if they neglect to hear them also, are by them excluded from the Holy Sacraments and the Christian communion, and by God Himself from the kingdom of Christ; and if they promise and show real amendment, they are again received as members of Christ and His Church.

The Importance of Homework

Mr. Harris would have done well to take some time to see what Christ and his apostles actually teach in the pages of Scripture, and what the church actually teaches through the creeds, confessions, and catechisms. That way he could compare those teachings to the actions of those he finds morally detestable and determine if Christianity is really to blame. Either Mr. Harris did no such research, which is irresponsible, or he did and didn’t like the outcome, which is dishonest.

Letters to a Christian Nation – Part 1

In a recent interview, Sir Elton John said that, if it were up to him, he would “ban religion completely.” He fortified his judgment with various moral charges, such as religion’s supposed lack of compassion and hatred of homosexuals.

What if Sir Elton had his wish? What would it mean? First, atheism (Sir Elton’s religion) would become the world’s de facto religion. Then the ban would have to be enforced. Should non-atheists simply be put in prison, or should they be put to death? (How tolerant and compassionate.)

This is typical atheist thinking. It never occurs to Sir Elton to argue for his worldview. Instead, he’d rather convert by the edge of the sword (sound familiar?)—indeed, throwing rocks and name calling is a common atheist practice.

Meanwhile, back on planet earth . . . By what moral standard does he judge “religion”? Are his own whims the standard? Why ought we care what he thinks? Why should we accept that his words carry moral weight?

This brings me to Mr. Harris’ book. It’s basically a longer version of Sir Elton’s tirade. Because of time constraints, I’ve only been able to get through about a third of the book. But page-after-page it’s the same: no arguments; just the author’s complaints, and evidences of his sharp tongue. He does, however, provide us with his principle of ethics:

Normative theory that human conduct is right or wrong because of its tendency to produce favorable or unfavorable consequences for the people who are affected by it. The hedonistic utilitarianism of Bentham, Mill, and Sidgwick maintains that all moral judgments can be derived from the greatest happiness principle.

From what I’ve read so far, Mr. Harris desires to put God in the dock. He has all kinds of moral complaints againt God—in his view, God doesn’t live up to his, Mr. Harris', Utilitarianism; the suppossed consequent of God’s “failing” is non-existance. His argument is basically this:

Strange way for the clay to argue against the potter's existance.

A House Needs a Foundation

Nevertheless, I’ll press-on through Mr. Harris’ book, taking you along for the ride, with the earnest hope that I’ll stumble upon a real argument. So stay tuned for part 2!

Michael Medved has a great commentary on Sir Elton’s comments titled, The "tolerant" Sir Elton wants to ban religion. In the commentary, Mr. Medved makes this insightful statement: “A point of view confident of its own arguments wouldn’t make the case for ‘bans’ or ‘suppression.’" 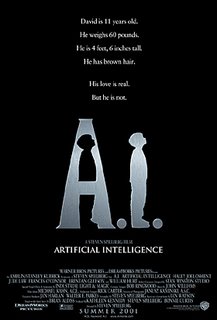 We define the soul as born from the breath of God, immortal, corporeal, having shape, simple in substance, intelligent in itself, working in various ways, having free will, subject to contingent circumstances, in its moods changeable, rational, exercising control, possessing intuition, overflowing out of one source.

I recently watched the movie A.I. Not a bad flick, but it won’t be replacing The Big Sleep as my favorite movie. The movie did, however, leave me thinking about artificial intelligence and the nature of the soul.

Desire and the Will

In the movie, David, the little machine boy, has the Pinocchian desire of becoming a real boy. This desire sets David on a trek to find the Blue Ferry, who supposedly can bring his desire to realization. Cute story.

Here’s the problem: desires are not physical and thus not produced by matter. They are products of the will. Therefore, a purely physical object like David cannot engage in such soulish activities as desiring. So the pain the audience feels because of David’s unfulfilled desire is completely misplaced—David cannot desire, so it cannot experience the emotional pain of unfulfilled desires (another activity of the soul).

My dear-old grand pappy always told me to “never switch androids in midstream,” but I’m going to anyways (I’m a rebel). Star Trek: Next Generation’s Commander Data had a pet cat named Spot. Data could tell you everything about that cat—from its molecular structure on up. But Data could never tell you what it’s like to BE a cat. That’s beyond a machine’s capability, and couldn’t be otherwise.

Even with Data's emotions chip, all it could do is mimic humanity. Unlike Data, I’m a human being (despite what my wife says); that’s concrete (physical). My “being” a human being entails my “humanity” which is abstract (not physical).

With a machine, what you see is what you get. But like the “redness” (abstract) of Rudolf’s red nose (concrete), human beings are more than the sum of their parts. We are “beings”; machines aren’t. Sorry, Data.

Back to A.I. Warning: If you haven’t seen the movie, what follows is known as a “spoiler.”

The aliens that find David are able to grant the wish—sort of. Although they cannot make it a real boy, they can bring back its human “mother” for one day. All they need is a strand of her DNA. Thankfully, the forward-thinking Teddy Bear has a strand of her hair.

In a nutshell, the aliens bring her back with most of her memories in place (odd though; she remembers the robot boy but seems to have forgotten her real family); they have a fun day together (another activity of the soul); then she goes bye-bye, and we all feel sad.

Once again, here’s the problem: Memories are not physical (not extended into space). Therefore, even if the aliens can produce her body from the DNA, they could not produce “her.” Her “identity,” which would include her memories, would not be present, for they are a product of the mind. More realistically, it would be like she had just died—you would have a body, but nobody would be home.

Although machines such as David and Data are theoretically possible, they’ll never be able to engage in actual soulish activities. These activities, being non-physical, will always be out of reach for even the most sophisticated thingamabob—but it does make for good fiction.

Letter to a Christian Nation

In the September 24, 2006, edition of the New York Times appeared the costly, full-page ad (about $100,000) promoting the new book by Atheist Sam Harris, Letter to a Christian Nation. The ad begins with the question, Ready to challenge religious dogma?, and then plugs the "courageous new book that arms all rational Americans with powerful arguments against their opponents on the Christian right."

Not only does the publisher think highly of the Stanford University Philosophy grad's case, so do others from the intelligentsia:

"Sam Harris's elegant little book is most refreshing and a wonderful source of ammunition for those who, like me, hold to no religious doctrine . . ." Sir Roger Penrose, emeritus professor of mathematics, Oxford University, author of The Road to Reality.

"Reading Harris' Letter to a Christian Nation was like sitting ring side, cheering the champion, yelling 'Yes!' at every jab. For those of us who feel depressed by this country's ever increasing unification of church and state, and the ever decreasing support for the sciences that deliver knowledge and reduce ignorance, this little book is a welcome hit of adrenalin." -Marc Hauser, Harvard College Professor, author of Moral Minds: How Nature Designed Our Sense of Right and Wrong.

"Sam Harris fearlessly describes a moral and intellectual emergency precipitated by religious fantasies-misguided beliefs that create suffering, that rationalize violence, that have endangered our nation and our future. His argument for the morality, the honesty, and the humility of atheism is galvanizing. It is a relief that someone has spoken so frankly, with such passion yet such rationality. Now when the subject arises, as it inevitably does, I can simply say: Read Sam Harris' Letter to a Christian Nation." -Janna Levin, Columbia University, author of How the Universe Got Its Spots and A Madman Dreams of Turing Machines.

So it seems that the Atheist elite believe they have hit a home run against their Christian foes; that is certainly what Mr. Harris thinks:

"In Letter to a Christian Nation, I have set out to demolish the intellectual and moral pretensions of Christianity in its most committed forms." (From Introduction, ix)

Making and Breaking a Worldview

Mr. Harris has two cases to make: a negative case against Christianity, and a positive case for Atheism. Of course, he could simply prove Atheism to be true, thus ruling out all contrary claims. But, instead, he has chosen to make the negative case.

I have recently purchased the book; my goal is to answer his arguments and to challenge his worldview. I will do so in a series of posts where I'll consider his arguments, answer them, and make my own challenges against the Atheistic worldview. My hope is that some of my Atheists readers will take me up on my challenges.