The noise of a pounding hammer hasn’t stopped after almost five hundred years. The notice nailed to the church door in a small German college town called Wittenberg on October 31, 1517, is still a friendly debate by a little-known monk named Martin Luther grew into a call for the reformation of the church.

That call has grown even louder over the centuries. It has focused on everything from the basic question of how to “get saved” to the complex question of how to structure and govern the church. How many Bible-believing Protestant churches since Luther’s day have based their existence on the need to separate from another church’s prevailing belief or practice that they judged unscriptural? In some cases real gospel principles were at stake; in others, mainly sinful egos. But there is no question that reformation is necessary, to a greater or lesser degree, in any church that wants to call itself biblical.

Even the Roman Catholic Church, Luther’s original target for reform, has caught on, though in a minor key. The Roman church now officially acknowledges that Luther was right in certain respects, though wrong in others. He was right to speak of justification by grace alone, but wrong to speak of justification by faith alone. They still reject the meat of his message while no longer officially branding him a monster.

And evangelical Protestants? They do not reject Luther’s message; many don’t even know what it was. Ask the average church member to explain justification by faith. That was Luther’s central message, and it still needs to be proclaimed today, especially in evangelical churches. Luther called allegiance to that doctrine the mark of a standing or falling church. The Reformation needs to continue, not merely by changing this or that practice to conform more with Scripture, but by hammering home as Luther did the central message of the gospel—justification by grace alone through faith alone.

That message was proclaimed in an obscure little church in Northampton, Massachusetts by its equally obscure pastor, Jonathan Edwards. The result was the Great Awakening, and its impact was felt throughout the whole of British North America.

Can it happen again?

Abortion and the Next Presidential Election

In a New York Times opinion piece, Dr. James Dobson of Focus on the Family writes of a recent meeting of 50 Christian “leaders.” Dr. Dobson describes the outcome:

After two hours of deliberation, we voted on a resolution that can be summarized as follows: If neither of the two major political parties nominates an individual who pledges himself or herself to the sanctity of human life, we will join others in voting for a minor-party candidate. Those agreeing with the proposition were invited to stand. The result was almost unanimous.

In other words, if Rudy Giuliani, or someone like him, gets the Republican nomination, Dr. Dobson and his fellow icons of modern Evangelicalism will march their flocks to the third-party Promised Land.

Assuming Hilary Clinton gets the Democratic nomination, there is no doubt that she’ll fight not only to ease any restriction on abortion but also to make abortion more common. Malinda the Enforcer at Stand to Reason’s blog quotes Hillary-biographer Paul Kengor:

If you’re a pro-lifer, and if no issue is more important to you than the right of an unborn child to have life, then nothing could be more calamitous than a President Hillary Clinton. I don’t know of any politician who is more uncompromising and extreme on abortion rights than Hillary Clinton. I know this well and don’t state it with anger or hyperbole. Her extremism on abortion rights was the single most shocking, inexplicable find in my research on her faith and politics. I couldn’t understand it. No question. It is truly extraordinary. Nothing, no political issue, impassions her like abortion rights. For Mrs. Clinton, abortion-rights is sacred ground.

Like Dr. Dobson, I’m troubled by the mayor’s position on abortion (you can read my critique of it in the post, Moral Confusion—Giuliani vs. Lincoln). Although Mr. Giuliani claims to be personally opposed to abortion, he thinks that ultimately it’s a state’s issue and thus should not be settled by the federal government. Because of this, Giuliani pledges to not expand abortion rights, but, instead, to do everything he can to decrease the number of abortions. He says that he’ll do so by enforcing the current ban on Federally funded abortions, requiring parental notifications, and encouraging adoptions (such as he did in New York).

What significant impact does a president have on the abortion issue? The appointment of Supreme Court justices. For this reason, the judicial philosophy of the next president is very important. In this regard we find a great divide between Giuliani and Clinton. Clinton believes that the Constitution is a “living, breathing” document that must be interpreted based upon the times in which we live, a sort of wax nose philosophy. It was judges with this philosophy that gave us Roe vs. Wade, and it is this type of judge that she’ll nominate in order to protect abortion.

Giuliani is of a different mind. He holds to the philosophy of original intent—what did the founders have in mind when they drafted the Constitution? Because of this, Giuliani has pledged to appoint “strict constructionists,” such as Scalia and Thomas. It is justices of this sort who will most likely overturn Roe vs. Wade.

The goal of the pro-life movement is to end abortion because we want to save as many innocent lives as possible. I’m sure this includes Dr. Dobson and his followers. My fear is, however, that they’ve lost site of this goal. They seem more interested in punishing the Republican Party than actually saving children’s lives. If Evangelicals vote for a third party, or simply stay home, they’ll guarantee a Clinton presidency. The result will be the loss of ground gained, such as the ban on partial-birth abortion, and the death of many more children. Reason being, Clinton has pledged to overturn the ban, and she’s promised to appoint pro-abortion justices who will secure abortion rights for the foreseeable future—and she’ll have Evangelicals to thank for it.

The other question has to do with the morality of voting for someone who is not, strictly speaking, pro-life. For this question I ask you to consider an excellent article by Stand to Reason president, Greg Koukl, titled, Statements vs. Impacts.

Since there is no middle ground on abortion—“choice” always means a dead child—then it’s critically important we make decisions at the polls that go beyond token moral gestures (something that looks right, but has no impact). We must make choices that have the greatest chance of actually saving children.

The question we’re faced with is this: If we were forced to choose between looking virtuous but having no further effect, or appearing ignoble but accomplishing some good, which path should we take? When we must choose one or the other, are we obliged by God to make a moral statement or to have a moral impact?

You can read the rest here.

Who is Sovereign in Salvation?- Part 5 – Arminianism: Free Will with Partial Depravity

In our last post on this topic we took a look at two analogies (one from Billy Graham and the other from Hank Hanegraaff) that are pressed into service on behalf of the Arminian Free Will with Partial Depravity position. We also considered an excerpt from George Bryson written as part of a Christian Research Journal debate he had with Calvinist James White.

In this post we’ll take a closer look at the two analogies by comparing them to Scripture.

The question is, do the above illustrations truly represent the plight of fallen man? Is it the case that man is simply spiritually impoverished or just very ill? To answer these questions we must consider the extent and the result of the Fall.

In the third chapter of Genesis, we read of our first parents’ sin. Because Adam represented us as our federal head, we all sinned in him (Rom. 5:12–19). The resulting corruption is passed on to us all, and its extent is total—every aspect of our being has been affected:

As we have seen, man is not simply ill or spiritually impoverished—he’s dead. Dead men cannot “take and drink” or accept a free gift from a king, not unless they are first made alive. Crassly put, dead men do what dead men do—they rot, they don’t search for God.

In the next post in this serious we’ll take a look at the Scriptures Mr. Bryson used to support his position to see if they make the case for Free Will with Partial Depravity (i.e., Even though fallen, man can, with God’s help, freely choose Christ) and thus trump the above case made for Total Depravity. 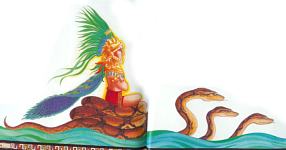 Will Any-old Revelation Do?

Kusum's father thinks that maybe this is a match made in heaven: "Maybe it is the wish of the God." The Reformation doctrine of Sola Scriptura (Scripture alone) protects us from such nonsense.

Everything God wants us to know He has revealed in Holy Writ (Due. 29:29). His Word is objective (not open to private interpretation, 2 Pet. 1:20) and propositional (factual and logical). God speaks to us in this way because, as His image-bearers, our minds have been fashioned after His.

Therefore, if one of my daughters came to me with a request to be united with a reptile, I don’t need to consult doctors, talking serpents, tea leaves, or Ms. Cloe; all I need is to open God’s Word and, by faith, use the mental tools He gave me. It is there that I’ll meet with the Living God, and it is there that I’ll hear His voice.

“The Bible is something more than a body of revealed truths, a collection of books verbally inspired of God. It is also the living voice of God. The living God speaks through its pages. Therefore, it is not to be valued as a sacred object to be placed on a shelf and neglected, but as holy ground, where people’s hearts and minds may come into vital contact with the living, gracious and disturbing God.”

Moreover, because God is immutable (doesn’t change, Mal. 3:6), I know that His word won’t change either. What a glorious, covenant-keeping God we serve.

I have sad news regarding the star-crossed lovers: apparently, suffering from cold feet (belly?), the snake has disappeared. Poor heartsick Kusum. But the ending is not totally sad—Kusum reports that the cobra is visiting her in her dreams. Does anyone know of an appropriate Hallmark card that I can send?