Stand to Reason (STR) has produced some fine, short videos that are viewable at GodTube. In the videos Greg Koukl, president of STR, provides answers to questions often asked by Christians and non-Christians alike. Questions include:

You can view the videos here.

The American Gospel by Jon Meacham 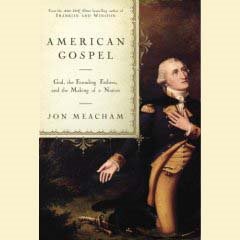 A few weeks ago, while on vacation, I ran across Jon Meacham on several news talk shows. The chief editor of Newsweek was discussing his book, The American Gospel. Because of my love for American history, particularly as it relates to our Christian heritage, the book piqued my interest.

Because of my interest in the book, I was glad to come across an insightful review by pastor Lee Johnson of First Reformed Church of Herreid South Dakota at his blog, Two-Edged Sword.

. . . The premise of the book is America has always had its own gospel, a religious center that allowed public religion (ie. invoking God), but favored no religion. Meacham proclaims that America is not a Christian nation, and that freedom and liberty ruled the founders not Christianity. The book reports to prove this theory. Sadly it fails on many fronts. It fails so bad in fact, I have to say it was an absolutely awful book. My major critics of this book fall into several major categories.

The major categories are as follows:

You can read the review in its entirety here.

Who is Sovereign in Salvation? – Part 6 – Arminianism: Conditional Election 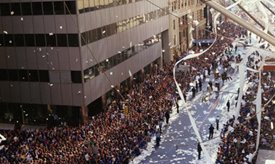 As we discovered in Part 5, man is dead in his sins and unable—and unwilling—to seek after God. Now we'll turn our attention to the Arminian doctrine of Conditional Election.

The doctrine of Conditional Election states that God “elects” men based upon His foreseeing their free-will choices. The following is typical of how Arminians explain this doctrine:

God looks down the corridor of time and sees who will choose Him. It's like a man peering out of a window in a tall building watching a parade pass below. He can see the parade from beginning to end. Likewise, God sees from the beginning of time until the end, and so He “elects” men based on what He sees them do.

Is it true that “election” means that we “choose” our way into God's good graces? Consider the following:

Indeed, you’ll be hard pressed to find anywhere in Scripture where men elect themselves to something. Just like how the term is used today, someone else always does the electing.

Tactical Note: The above illustrations employ a tactic called reductio ad absurdum (reduce to absurdity). In this tactic you assume your opponent's premises and then follow the logic of the premises to their absurd conclusion. In this case, we assume the Arminian definitions of “election” and “choice” and discover that they've changed the meaning of the terms to something nonsensical.

The question is who does the choosing: God or man? Consider the following passages:

28) And we know that God causes all things to work together for good to those who love God, to those who are called according to His purpose.

29) For those whom He foreknew, He also predestined to become conformed to the image of His Son, so that He would be the firstborn among many brethren;

just as He chose us in Him before the foundation of the world, that we would be holy and blameless before Him In love.

13) But we should always give thanks to God for you, brethren beloved by the Lord, because God has chosen you from the beginning for salvation through sanctification by the Spirit and faith in the truth.

14) It was for this He called you through our gospel, that you may gain the glory of our Lord Jesus Christ.

Is the Choice Based Upon Foreseen Faith or Acts?

The next question we must consider is whether or not God's choice is based upon foreseen faith or upon foreseen works. Consider the following passages:

11) for though the twins were not yet born and had not done anything good or bad, so that God's purpose according to His choice would stand, not because of works but because of Him who calls,

So then it does not depend on the man who wills or the man who runs, but on God who has mercy.

who has saved us and called us with a holy calling, not according to our works, but according to His own purpose and grace which was granted us in Christ Jesus from all eternity

As we've seen above, the Scriptures are clear: God grants salvation to those whom He chooses. His choice is not based upon any foreseen faith or works, but on His own sovereign will and gracious good pleasure.

Stay tuned for part 7 where we'll consider the Arminian doctrine of Unlimited Atonement.