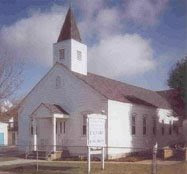 On June 29, 1945, the Gospel Pavilion, the building housing the Boardwalk Chapel in Wildwood, New Jersey, was dedicated.

Likening the Wildwood sea-side resort to a modern version of Bunyan's Vanity Fair, Rev. Leslie Dunn, pastor of Calvary OPC in Wildwood, had posed this challenge to his congregation: ‘Where, in such a modern Vanity Fair as Wildwood, can Faithful buy the Truth?’ Under his initiative the Wildwood congregation purchased a vacant lot in 1944 at a public auction for $2950. After the War Production Board granted a building permit, a pavilion was quickly erected through the sponsorship and contributions from the Presbytery of New Jersey. For over fifty years since then the Boardwalk Chapel has diligently presented a gospel witness to thousands of boardwalk strollers, through personal evangelism by volunteer staff and nightly services conducted throughout the summer months.

On June 22, 1974, Debbie Dortzbach's ordeal ended when her kidnappers released her in Massawa, Eritrea.

On May 27, four armed members of the Eritrean Liberation Front abducted the missionary intern at gunpoint along with Anna Strikwerda from the Compassion of Jesus Hospital, an Orthodox Presbyterian medical mission in Ghinda, Eritrea. When Miss Strikwerda, who had served the mission as a nurse for eight years, was unable to keep pace with her kidnappers, she was shot and killed. Mrs. Dortzbach, pregnant with her first child, was held captive for 26 days, while the mission refused the ELF's demand for payment of a ransom.

Miss Strikwerda was the first martyr of the Orthodox Presbyterian Church. For weeks, the church feared that Mrs. Dortzbach would become the second. Indeed, a letter from her captors warned the mission that it would bear the consequences for refusing to pay the ransom. A few days later the church rejoiced when the kidnappers unexpectedly released her unharmed. Because of the escalation of the Eritrean civil war, the Committee of Foreign Missions determined soon after to close the mission.

The Clark/Van Til Controversy (Updated 6/5)

What's with all of that acrimony between followers of Van Til and followers of Clark? Rev. Lee Johnson over at the Two-Edge Sword offers some insightful thoughts on this topic. Here's an excerpt:

In my opinion the reason is twofold. I believe the first and primary reason such anger exists is because of the historical record or the distortion of the historical record. Note several times the debate boils down to what actually happened with the Van Tillians arguing Van Til was not the main antagonist and Clarkians becoming irate at the idea Van Til is to be cleared (see especially comments 94, 126, and 128). I have no doubt in the authenticity of the account given in this post by Rev. [Gary] Johnson about Clark saying Van Til treated him with respect. Clark apparently preferred to place the black hat on Ned Stonehouse. Meuther has a new biography of Van Til that places the blame on John Murray. However, it needs to be noted that whether or not Van Til is the impetus or not is not the point. Van Til participated. The OPC Presbytery of Philadelphia’s own minutes show that Van Til was indeed one of the signers of the Complaint against Clark’s ordination in 1944. Murray and Stonehouse signed it as well. Van Til then participated in the debate (again according the minutes) at the Presbytery Meeting giving at least one lengthy speech against Clark. Again Stonehouse and Murray participated. In fact, the entire Westminster Faculty participated. The minutes recorded in the Presbyterian Guardian actually directly state Van Til declared "that it was no mere matter of a difference in terminology". Van Til clearly voted against Clark. Does it really matter who led the charge? Van Til was clearly against Clark and worked against him in the church courts. This is a historical fact that simply needs to be admitted. Van Til worked to keep Clark out of the OPC as in fact did the entire Westminster Seminary Faculty. This is a sore spot for followers of Clark and the attempted removal of blame for this from Van Til aggravates the situation.

Permit me to address several misleading statements in the blog that you quote at length. First, in my biography I did not place any "blame" on Murray; rather I sought to explain why he had a higher ecclesial profile in the debate than Van Til. Secondly, it is inaccurate to say that Van Til "worked against [Clark ] in the church courts," and that he sought to "keep Clark out of the OPC." Clark (a ruling elder in the OPC for its first eight years until his ordination to the ministry) was never on trial in the courts of the OPC. Van Til joined others in his Philadelphia Presbytery in a complaint to the GA against that Presbytery for alleged procedural improprieties in the ordination of Clark. To be sure, these were related to contested features of Clark's theology. But when the GA appointed study committees to investigate doctrinal aspects of the debate, Van Til was disqualified from serving on those committees by virtue of his membership in the Presbytery where the dispute arose. Murray, on the other hand, as a member of the Presbytery of New York and New England was free to serve. Van Til welcomed Murray's leadership because he was confident of Murray's views. Moreover, Van Til's energy throughout this period was directed less toward Clark than to the big book on Barth that he was writing (The New Modernism).

Murray's role in the controversy does not earn him any blame. But it does qualify the sense in which Van Til should be considered the leader of the group that came to have reservations about Clark's theology. That was my only point.