Was Jesus Against Capital Punishment?

The United Methodist Church declares its opposition to the retention and use of capital punishment and urges its abolition. In spite of a common assumption to the contrary, "an eye for an eye and a tooth for a tooth," does not give justification for the imposing of the penalty of death. Jesus explicitly repudiated retaliation (Matthew 5:38-39), and the Talmud denies its literal meaning and holds that it refers to financial indemnities.


Oftentimes, when capital punishment is being discussed, Jesus’ remarks regarding “an eye-for-an-eye” are pressed into service. When coupled with the “turn the other check” passage, capital punishment abolitionists believe that they’re holding a biblical wining hand.

But is it the case that Jesus was either rejecting capital punishment or setting the record straight (i.e., that eye-for-an-eye doesn’t apply to the death penalty)? Likewise, is “turn the other check” a condemnation of capital punishment and a call to passivism?

39) "But I say to you, do not resist an evil person; but whoever slaps you on your right cheek, turn the other to him also.

In figuring out what Jesus meant, we should first see what he was referencing. The relevant passages are Ex. 21:12–36, Lev. 24:17–23, and Deut. 19:14–21. In these passages God is laying out a principle of justice: the punishment should fit the crime. This would, of course, include financial matters, as the United Methodist Church (UMC) suggests. But to say that God is only interested in justice when it comes to commerce makes God the moral equivalent of Ebenezer Scrooge.

Contrary to the claim of the UMC, God’s perfect moral character requires justice in all matters, including the most heinous crime committed against man.

Whoever sheds man's blood, By man his blood shall be shed, For in the image of God He made man.

Did Jesus Overturn This Principle?

For Jesus to reject an “eye-for-an-eye” means that He would reject the principle that the punishment should fit the crime. The question abolitionists need to answer is, “Is it your understanding that Jesus taught that the punishment should not fit the crime? Do you believe that Jesus rejected justice?” Indeed, such a teacher would be profoundly immoral, and not worthy of our attention.

Did Jesus Reject the Capital Punishment?

The logic of the above syllogism is inescapable. The only way around it is to show that either the major premise (first sentence) or the minor premise (the second) is false: either God didn’t establish the death penalty or Jesus isn’t God. Of course, if one takes the Scriptures seriously, then neither can be rejected.

With murder, there is one more thing that must be considered beyond just the “eye-for-an-eye” principle. As Genesis 6:9 points out, man is made in the image of God. Consequently, murder is not simply taking a man’s life—it’s destroying the very image of God. This profoundly compounds the sin.

So, the second question we must ask is, “Is man no longer God’s image bearer? Or, if he is, is it now no big deal to destroy that image?”

As with the earlier questions regarding the rejection of justice, these questions too cannot be answered in the affirmative.

What Jesus’ Words Do Not Mean?

First, what they don’t mean. Throughout the Sermon on the Mount, Jesus uses personal pronouns, such as “You are the salt of the earth,” Let your light shine,” For truly I say to you,” and, in the passage in question, “But I say to you.” This is important because it shows that He is addressing His immediate hearers and us (i.e., individuals). He is not talking to the government. Therefore, He’s not telling the government to turn the other check. Furthermore, the New Testament affirms the state’s right, as God’s minister, to execute judgment via the sword (Rom. 13:4; Acts 25:11). And since the New Testament came from Jesus, He affirms the state’s right to carryout capital punishment.

It also isn’t a call to passivism. Even the most cursory reading of the Old Testament will reveal that God isn’t a pacifist. Moreover, Jesus, who is God incarnate, instructed His disciples to arm themselves for journey (Luke 22:36). Why were they to buy a sword, even if it meant selling their garment? Answer: For self defense along the dangerous Roman highways. And, let us not forget what happened when the Temple Guard came to arrest Jesus:

50) And Jesus said to him, "Friend, do what you have come for." Then they came and laid hands on Jesus and seized Him.

51) And behold, one of those who were with Jesus reached and drew out his sword, and struck the slave of the high priest and cut off his ear.

52) Then Jesus said to him, "Put your sword back into its place; for all those who take up the sword shall perish by the sword.

Jesus didn’t respond, “Hey! Where did you get that thing? How long have you been carrying that? Get rid of it before it kills us all!” Instead, he told Peter to return it to its sheath, followed by the instruction that this was an inappropriate time for its use.

There’s one other problem with the pacifistic interpretation, and that’s with its application. Let’s say someone breaks into your house and steals one of your children. Do you offer the intruder your other child as well?

What Do Jesus’ Words Mean

I’m partial to an interpretation I heard from Greg Koukl of Stand to Reason. Since most people are right handed, how would someone slap you on the right cheek? He would do so by slapping you with the back of his hand. A back-handed slap is not meant to injure, but to insult. And let us not forget that when Jesus was struck by one of the temple guards, He did not turn the other cheek. Instead, He inquired as to the justice of the action (John 18:22–23).

“Turn the other cheek” is not a call to passivity, nor is it an overturning of the principle that the punishment should fit the crime (including capital punishment). It seems that what Jesus is actually calling us to do is to bear insults and to not respond in kind, just like in the verses following Mat. 5:39 where we are instructed to bear other such personal affronts.

The UMC would do well to reconsider their opposition.

America and a Dutch Hymn 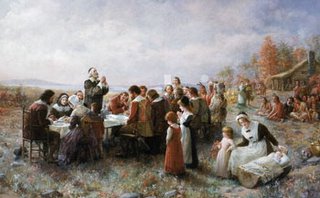 A large part of the early immigrants to America were Dutch Calvinists escaping persecution. They brought with them a passion for the things of God and a desire to build a godly society. It was from this breading ground that magnificent hymns such as We Gather Together to Ask the Lord's Blessing (circa 1597) came to our shores.

We gather together
to ask the Lord's blessing;
he chastens and hastens
his will to make known.
The wicked oppressing
now cease from distressing.
Sing praises to his name,
he forgets not his own.

Although originally penned across the seas, We Gather Together to Ask the Lord's Blessing captures the essence of these early settlers’ faith and devotion. This hymn has since grown to become part of America’s heritage, especially our Day of Thanksgiving.

I commend to you an Opinion Journal article, A Hymn's Long Journey Home, that recalls for us this great heritage, while informing us of the history of this truly stirring hymn. As you read the article, rejoice in the magnificent grace God has shown us.