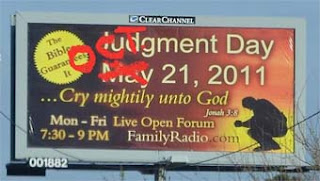 In case you missed Harold Camping’s May 21 doomsday prediction, never fear: He’s offering a reunion tour this coming October. I’m sure that he and his followers believe that three times will be the charm. Back when Camping’s first prediction failed in 1994, Dr. Gregg Bahnsen wrote the following for Penpoint (Vol. V:9) . . .

As I write (at the beginning of September, 1994) I am anticipating that this issue of Penpoint will be printed, processed and delivered to you. By the time you are reading it, the month of September will have come and gone―which means the world, after all, did not end according to the timetable and prediction of radio broadcaster, Harold Camping. This really isn't much of a surprise.

Two years ago Camping published a convoluted and dense study of Biblical chronology and prophecy, entitled 1994?, suggesting (or "proving," according to his followers) that Christ will return, and the world as we know it will end, sometime during September of this year―and most likely between September 6 and 15. A Camping follower and chemist from Delaware was quoted (Knight-Ridder Newspapers) as saying: "I will be absolutely shocked if this doesn't happen on September 6." Camping declared that "some kind of sign" would occur on that date, one which will create worldwide consternation, fear, and bewilderment. Another Camping disciple, a Reformed Episcopalian from Philadelphia, said: "nothing, absolutely nothing, can change my mind." Except maybe the course of recent history.

Camping's meandering and misguided sojourn into chronology, symbolism, arbitrary numerology, and eschatological date-setting, along with his subsequent book Are You Ready?, have sold between 60-100 thousand copies, thus securing a tidy financial gain for the prognosticator, along with his ruined reputation. Some months ago he was even willing to appear on the Larry King call-in show on television (CNN) to present and defend his views to millions of viewers in this nation and around the world.

Because of the tremendous reproach he has brought on the name of Christ and the trustworthiness of Scripture, I trust Camping will now leave the radio, stop presenting himself as a reliable teacher of God's holy word, and publicly repent of his brazen attempt to do what Christ Himself declared no man could do―not even Jesus Himself with respect to His human nature! "But of that day and hour knows no one, not even the angels of heaven neither the Son, but the Father only" (Matthew 24:36; cf. 24:36, 42; 25:13). "It is not for you to know times or seasons which the Father has placed under His own authority" (Acts 1:7).

We've Been There, Done That

Camping has acted contrary to the Savior's own words and brought embarrassment upon the cause of His kingdom, but Camping's faux pas is anything but unique.[Note: It is unusual to have a date-setter be an amillennialist like Camping; most turn out to hold a premillennial (and dispensationalist) perspective. However, I even know one postmillennialist who predicts the beginning of "the latter day glory" of Christ's kingdom to be around the year 2000. The infection of a date-setting mentality can afflict adherents of any millennial viewpoint, even though the best representatives of all three (or four) schools vaccinate against it.] God's people have been scandalized by date-setters throughout the New Testament era. There have been dozens in our own generation.

In 1970 Hal Lindsey published The Late Great Planet Earth, which went on to sell millions of copies. He predicted that Christ would return within forty years ("a generation") of the re-establishment of the nation of Israel in 1948. Heading an Arab-African alliance, Egypt was supposed to attack Israel, with the Soviet Union subsequently entering the fray. His predictions caused enough hoopla that even Time magazine covered it (Jan. 8, 1973: "Is the End Near?"). Lindsey later wrote: "unmistakably... this generation is the one that will see the end of the present world and the return of Christ" (The 1980's: Countdown to Armageddon, 1981).

In 1981 Bill Maupin, leader of the Lighthouse Gospel Tract Foundation (Tucson), declared that "there isn't any chance" that the rapture would not take place on June 28 of that year. His followers quit their jobs and gave away their cars. Six weeks later he had revised his calculations, and his followers again gathered at his house, waiting to be lifted off the face of the earth. But his was a small flock.

Not so for Chuck Smith, founder of the Calvary Chapel network of huge worship centers (first in Costa Mesa, CA). In "Future Survival" (1978) he said: "From my understanding of biblical prophesies, I'm convinced that the Lord is coming for His Church before the end of 1981."

In 1986 Charles Taylor (Anaheim, CA), the editor of Bible Prophecy News published the startling calculation (about which he claimed to be "89 percent sure"!) that Jesus Christ would return on September 24, 1987. "All signs point to it," he assured readers, based on a complex formula he extrapolated from Leviticus and Daniel. "The majority of Christians," according to him, knew that the rapture would take place within the next couple of years.

Edgar C. Whisenant (Little Rock, AR) could prove it with mathematical precision; he was, after all, a rocket scientist. So he set out to demonstrate how "all the 886 end-time Bible prophecies" coalesced to make Rosh Hashanah of 1988 the exact date of Christ's return to rapture the saints. He published 88 Reasons Why the Rapture is in 1988. Whisenant was anything but humble: "Only if the Bible is in error am I wrong, and I say that unequivocally."

Jesus' Own Words About the Time of His Return

What should faithful followers of the Lord Jesus believe about the time when He will return to end history (1 Cor. 15:24), physically raise all the dead (John 5:28-29), separate the sheep from goats into eternal life and eternal punishment (Matt. 25:31-46), establish a new earth wherein righteousness dwells (2 Peter 3:7-13) and wipe every tear from our eyes (Rev. 21:4)? Clearly these things have not happened yet in history.[Note: The fact of Christ's yet future, visible and glorious return should be conspicuous to those who study their Bibles. Readers should be warned against the heretical view (a radical or extreme preterism) which holds that all Biblical prophecy was fulfilled by the time of (and in) the destruction of Jerusalem in 70 A.D.―a view popularized in our day by J. Stuart Russell, Max King, Edward Stevens (cf. the periodical, Kingdom Counsel), and others.]

The false presupposition common to both these opposite errors is presuming that we have any right to calculate, speculate, or set the date of Christ's return. Even though the Bible gives us certain "signs of times" in the form of things which God promises to accomplish prior to the end of history, nobody knows how long the time will be after the fulfillment of those conditions when Christ will consummate the kingdom and deliver it up to the Father (1 Cor. 15:24). Just because we do not and cannot know the time, the one and only thing Christ requires of His followers in this regard is simply faithful living in preparation for His coming at whatever time the Father has determined. If we constantly live in obedience to His word, serving Him and watching for Him at all times, then that day will not overtake us "as a thief in the night" (1 Thess. 5:4-6). 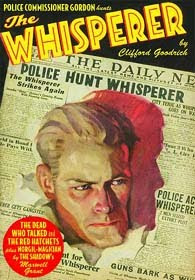 The whole counsel of God concerning all things necessary for his own glory, man's salvation, faith and life, is either expressly set down in Scripture, or by good and necessary consequence may be deduced from Scripture: unto which nothing at any time is to be added, whether by new revelations of the Spirit, or traditions of men . . .

One of the issues resolved by the Reformers was that of final authority, i.e., Are the Scriptures sufficient for doctrine and life? The Reformers, of course, answered in the affirmative. Louis Berkhof summarized their case as follows:

In Scripture each succeeding book connects up with the proceeding (except in contemporary narratives), and is based on it. The Psalms and the Prophets presuppose the Law and appeal to it, and to it only. The New Testament comes to us as the fulfillment of the Old and refers back to nothing else. Oral traditions current in the time of Jesus are rejected as human inventions, Matt. 5:21–28; 15:4, 9; I Cor. 4:6. Christ is presented to us as the acme of the divine revelation, the highest and the last, Matt. 11:27; John 1:18; 17:4, 6; Heb. 1:1. For the knowledge of the way of salvation we are referred to Scripture only, to the word of Christ, and the apostles, John 17:20; I John 1:3 . . .

Both Rome and the Anabaptists rejected the sufficiency of Scripture. Rome put as Scripture’s rival her church councils and traditions, with the ultimate authority residing in the pope. The Anabaptists, however, had a low view of Scripture for other reasons: they sought guidance from an “inner light” and direct revelations from God, resolving that the Spirit worked apart from the Word because the Word was dead.

Renting the Spirit from the Word by claiming direct revelations from God was something the Reformers could not abide. For that reason, Martin Luther derisively referred to them as “swarmers” because they were “swarming everywhere, deranged by the devil, regarding Scripture as a dead letter, extolling nothing but the Spirit and yet keeping neither the Word nor the Spirit.”

Likewise, in speaking of the link between the Spirit and the Word, John Calvin wrote . . .

Two things are connected here, the Word and the Spirit of God, in opposition to the fanatics, who aim at oracles and hidden revelations apart from the Word.

David Wilkerson and the Modern Swarmers

For ten years I have been warning about a thousand fires coming to New York City. It will engulf the whole megaplex, including areas of New Jersey and Connecticut. Major cities all across America will experience riots and blazing fires—such as we saw in Watts, Los Angeles, years ago . . .

Note: I do not know when these things will come to pass, but I know it is not far off. I have unburdened my soul to you. Do with the message as you choose.

In my years as a Pentecostal I saw the shipped-wrecked lives of those who listened to the modern swarmers. I’ve also experienced (and sill experience) the derision of unbelievers as they scoff at Christ and His followers because of those who claim that God is whispering in their ear. Worst of all, these false prophets blaspheme our God by taking His name in vain. This crime of speaking when God has not spoken is so heinous that, in Old Testament times, God commanded that these offenders be put to death (Deut. 13, 18:20-22, 13:12-13; Ez. 13:1-9; Zech. 13:3).

The Bible is something more than a body of revealed truths, a collection of books verbally inspired of God. It is also the living voice of God. The living God speaks through its pages. Therefore, it is not to be valued as a sacred object to be placed on a shelf and neglected, but as holy ground, where people’s hearts and minds may come into vital contact with the living, gracious and disturbing God.