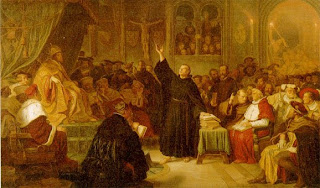 Are there things still separating Rome from Protestants? Evangelicals will typically say “yes,” citing the obvious examples of the papacy, the worship of saints and Mary, and the mass. Although these are valid and important differences, what was really at the heart of the Reformation was the doctrine of Justification . . .

This one and firm rock, which we call the doctrine of justification is the chief article of the whole Christian doctrine, which comprehends the understanding of all godliness

In a day where most Protestants are unfamiliar with the term “Protestant,” and in a day when eminent Protestant scholars write, “Catholics and evangelicals now believe approximately the same thing,” it is essential for us to reacquaint (learn?) ourselves with this key difference, a difference where the very gospel itself hinges.

To this end I recommend an article penned by R.C. Sproul reposted at the Reformation Theology site. Here’s an excerpt:

Both Roman Catholic and Reformation theology are concerned with the justification of sinners. Both sides recognize that the great human dilemma is how unjust sinners can ever hope to survive a judgment before the court of an absolutely holy and absolutely just God. If we define forensic justification as a legal declaration by which God declares a person just and we leave it at that, we would have no dispute between Rome and Evangelicalism. Though Rome has an antipathy to the concept of forensic justification, this antipathy is directed against the Protestant view of it. In chapter 7 of the sixth session of the Council of Trent, Rome declared: "...not only are we reputed but we are truly called and are just, receiving justice within us, each one according to his own measure...." Here Rome is jealous to distinguish between being reputed just and actually being just, yet it is still true that God calls the baptismally regenerated just. That is, for Rome justification is forensic in that justification involves God's legal declaration. A person is justified when God declares that person just. The reason or the ground of that declaration differs radically between Roman Catholic and Reformed theology. But both agree that a legal declaration by God is made. Nor is it sufficient merely to say that Rome teaches that justification means "to make just," while Protestants teach that justification means "to declare just."