f The Wittenberg Door: Today in History: The Ark, The Dove, and a Milestone in Religious Freedom

Today in History: The Ark, The Dove, and a Milestone in Religious Freedom 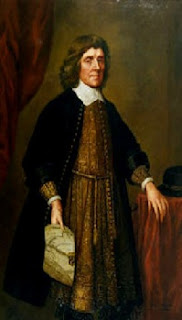 On March 25, 1634, about two hundred English settlers climbed off of two small ships named the Ark and the Dove anchored in the Potomac River, rowed ashore to a slice of land they named St. Clement’s Island, erected a cross, and held a thanksgiving service. It was the beginning of the colony of Maryland——a good day for religious freedom.

Maryland was found by Cecilius Calvert, also known as Lord Baltimore, who received a charter from England’s King Charles for some 12 million acres at the northern end of the Chesapeake Bay. Calvert was a Roman Catholic at a time when Catholics were persecuted in England, and he founded his colony to be a haven where Catholics could worship freely. He name it Maryland in honor, he said, of Queen Henrietta Maria, King Charles’s wife, although Catholics quietly understood the land to be named in honor of Mary, mother of Jesus.

Calvert wanted Maryland to be a place where both Catholics and Protestants could worship freely, partly because he knew he would need Protestants to help settle his colony. In 1649 the colonial assembly passed a Toleration Act guaranteeing that no Christians in Maryland would be in “any waies troubled, Molested or discountenanced for or in respect of his or her religion nor in the free exercise thereof.” Such toleration led Puritans and Quakers to flee to Maryland from Virginia, where they were persecuted by Anglicans. Maryland became renowned for its religious liberties.

By modern standards, those liberties were restrictive. They applied only to Christians. There were times in the colony’s history when Catholics and Protestants fought each other and peopled were indeed persecuted for their religion.

Nonetheless, Maryland’s Toleration Act was a historic step forward for freedom. It laid down a principle no central to our way of life.

1634 - The colony of Maryland is founded by Catholic and Protestant settlers sent by Lord Baltimore.

1911 - A fire kills 146 garment workers at the Triangle Shirtwaist Company Factory in New York City, leading the public to call for safety reforms.

1965 - Civil rights activists led by Martin Luther King Jr. end their historic march from Selma to Montgomery, Alabama, at the steps of the state capitol.

posted by The Catechizer and The Deacon | 6:27 AM