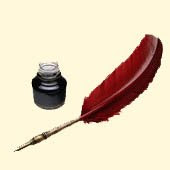 Continued from Part Two – The Necessity of Scripture . . .

God, who at various times and in various ways spoke in time past to the fathers by the prophets, has in these last days spoken to us by His Son…

Not all of divine revelation was recorded. Throughout redemptive history, God has spoken to His people. But for His own sovereign purpose, He did not have all His “speakings” inscripturated.

And there are also many other things that Jesus did, which if they were written one by one, I suppose that even the world itself could not contain the books that would be written.

Inscripturation is necessary for the following reasons:

In summary, Scripture is necessary because it . . .

posted by The Catechizer and The Deacon | 6:21 PM