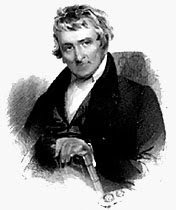 On April 17, 1772, Archibald Alexander was born near Lexington, Virginia.

Educated at Liberty Academy (now Washington and Lee University) and ordained in 1794, Alexander was president of Hampden-Sydney College and served as pastor of Third Presbyterian Church in Philadelphia for six years. In 1812, the General Assembly appointed him the first faculty member of the newly created Princeton Theological Seminary. As "Professor of Didactic and Polemic Theology," he would soon be joined by Samuel Miller and Charles Hodge, and eventually by two of his sons, James Waddel Alexander and Joseph Addison Alexander, as well. He would serve at Princeton until shortly before his death in 1851.

Born of second-generation Scotch-Irish parents and converted through frontier revivals in the Shenandoah Valley, Alexander always considered Virginia his home. Although he was an opponent of the excesses of revivalism, he insisted on the importance of the experiential dimension of the Christian life, especially in his 1841 book, Thoughts on Religious Experience.

posted by The Catechizer and The Deacon | 5:51 AM