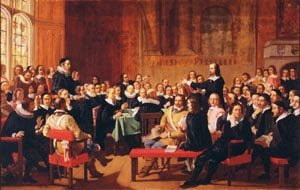 On April 14, 1648, the Westminster Assembly of Divines presented its Catechisms to Parliament: the Larger Catechism for pulpit exposition and the Shorter Catechism for the education of children.

When the 121 divines convened in 1643, they set out at first to review the Anglican -Nine Articles of Religion, which was considered essentially but not sufficiently Calvinistic. Soon the work of the Assembly expanded, and five years and 1,163 sessions later, it produced the Westminster Confession of Faith, the Larger and Shorter Catechisms, the Directory for Public Worship, and the Form of Church Government.

In the words of John Murray, "The Westminster Confession and Catechisms are . . . the mature fruit of the whole movement of creed-formation throughout fifteen centuries of Christian history, and, in particular, they are the crown of the greatest age of confessional exposition, the Protestant Reformation. No other similar documents have concentrated in them, and formulated with such precision, so much of the truth embodied in the Christian revelation."

posted by The Catechizer and The Deacon | 5:47 AM