f The Wittenberg Door: Today in History: “I’ve Been to the Mountaintop”

Today in History: “I’ve Been to the Mountaintop” 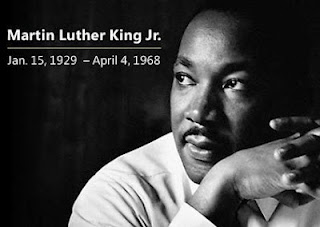 On the evening of April 4, 1968, thirty-nine-hear-old Rev. Martin Luther King Jr. was struck down by an assassin’s bullet while standing on a motel balcony in Memphis, Tennessee.

King had been receiving death threats for more than a decade, but he never shied away from making public appearances. The night before his death, he’d spoke at a Memphis church. “We’ve got some difficult days ahead, but it really doesn’t matter with me now, because I’ve been to the mountaintop,” he said. “And I don’t mind. Like anybody, I would like to live a long life, Longevity has its place. But I’m not concerned about that now. I just want to do God’s will. And he’s allowed me to go up to the mountain, and I’ve looked over, and I’ve seen the Promised Land. I may not get there with you, but I want you to know tonight that we as a people will get to the Promised Land."

The following evening, Dr. King was leaning over a balcony railing at the Lorraine Motel, where he was staying, when a shot sounded, and he fell dead. James Earl Ray, a drifter and escaped convict, was convicted of the assassination.

As reports of King’s murder were broadcast, riots broke out in hundreds of cities and towns. In some places looting and burning continued for days until the National Guard restored order.

Those were times when America felt like a runaway-train ride. But even as millions mourned the loss of an extraordinary leader, they redoubled their efforts to make their country a place which King would be proud.

A memorial plaque at the site of the assassination quotes Genesis 37:19–20. It reads: “They said one to another, Behold, here cometh the dreamer. Let us slay him and we shall see what becomes of his dreams.” The inscription challenges each of us to “see what will become of his dreams.”

1841 - President William Henry Harrison dies of pneumonia one month after his inauguration.

1850 - The city of Los Angeles is incorporated.

posted by The Catechizer and The Deacon | 5:42 AM