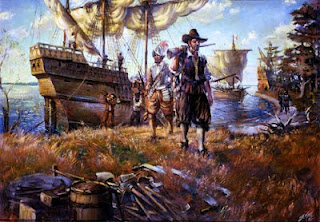 On April 26, 1607, three small ships from England named the Susan Constant, Godspeed, and Discovery sailed into the Chesapeake Bay in what now is Virginia. On board were 104 colonists who came ashore, erected a wooden cross, and gave thanks to God for their passage across the Atlantic. In the following days they ventured inland along a wide river they name the James, after their king, and established themselves on a low island sixty miles from the bay’s mouth. Jamestown would turn out to be the first permanent English settlement in North America——the very beginning of what would become the United States.

That the colony survived comes close to being a miracle. The land the settlers chose was swampy and mosquito infested. The drinking water was bad. Malaria, typhoid, and dysentery took their toll, as did the clashes with the Indians. Some of the colonists were ill prepared for frontier life. At times they spend more energy looking for gold than trying to stay alive. During the first summer, fifty died.

More ships arrived with more colonists and supplies, but still it was a tough going. During the winter of 1609–1610, a siege by the Indians brought the “starving time.” One settler remembered that “many times three or four [died] in a night; in the morning their bodies trailed out of their cabins like dogs to be buried.” Out of about 214 colonists, only 60 survived. They decided to go back to England but had sailed only a few miles downriver when they met a new governor arriving with yet more settlers, so they turned around.

Jamestown endured partly due to the discovery of tobacco——a crop as good as gold——but largely because of dogged perseverance. By 1619 the colony had grown enough to elect its own House of Burgesses——the first representative legislative assembly in the Western Hemisphere.

1961 - The integrated circuit is patented by Robert Noyce.

posted by The Catechizer and The Deacon | 5:59 AM