f The Wittenberg Door: Today in History: The National Motto

Today in History: The National Motto 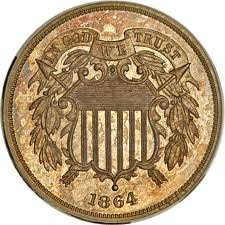 Look on any U.S. coin or paper and you’ll find America’s national motto, In God We Trust.

The suggestion to recognize God on U.S. money initially came during the Civil War from Pennsylvania minister M.R. Watkinson. “From my heart I have felt our national shame in disowning God as not the least of our present national disasters,” Watkins wrote to Samuel Chase, Abraham Lincoln’s secretary of the treasure.

Chase thought the suggestion a good one, and he instructed the U.S. Mint to come up with a motto recognizing that “no nation can be strong except in the strength of God, or safe except in His defense.” The resulting phrase, In God We Trust, may have had its inspiration in the fourth stanza of Francis Scott Key’s “The Star-Spangled Banner”: “Then conquer we must, when our cause is just, and this be our motto: ‘In God is our trust.’”

On April 22,1864, Congress passed legislation authorizing use of the phrase In God We Trust, and it first appeared on two-cent coins issued that same year.

For many years after that, the slogan appeared on some coins and not on others. In 1955 Congress ordered it placed on all U.S. currency, and in 1956 Congress made In God We Trust the official national motto. The phrase continues to remind us that our country has long found strength through faith in God, and that He has bestowed many blessings on America, including our freedom.

1864 - Congress authorizes use of the phrase In God We Trust on U.S. coins.

1889 - The Oklahoma Land Rush begins with thousands of homesteaders hurrying to stake claims on unassigned land.

1898 - In the first action of the Spanish-American War, the USS Nashville captures the Spanish ship Buena Vista off Key West, Florida.

1970 - Earth Day is observed across the country for the first time.

posted by The Catechizer and The Deacon | 5:55 AM