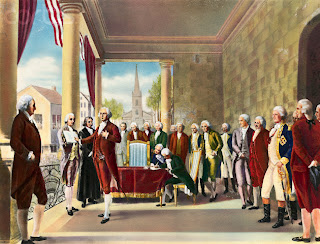 On April 30, 1789, George Washington took office in New York as the first president of the United States. In his inaugural address, he began his duties by giving thanks to the Almighty for the blessings the new country had received during the Revolution and making the Constitution:

It would be peculiarly improper to omit in this first official act my fervent supplications to that Almighty Being who rules over the universe, who presides in the councils of nations, and whose providential aids can supply every human defect, that His benediction may consecrate to the liberties and happiness of the people of the United States a Government instituted by themselves for these essential purposes, and may enable every instrument employed in its administration to execute with success the functions allotted to his charge. In tendering this homage to the Great Author of every public and private good, I assure myself that it expresses your sentiments not less than my own. . . . No people can be bound to acknowledge and adore the Invisible Hand which conducts the affairs of men more than those of the United States. Every step by which they have advanced to the character of an independent nation seems to have been distinguished by some token of providential agency. And in the important revolution just accomplished in the system of their united government, the tranquil deliberations and voluntary consent of so many distinct communities from which the event has resulted cannot be compared with the means by which most governments have been established without some return of pious gratitude, along with an humble anticipation of the future blessings which the past seem to presage.

1803 - The United States concludes negotiations with France for the Louisiana Purchase, doubling the size of the young republic for $15 million.

1939 - Franklin D. Roosevelt becomes the first president to appear on TV as he opens the World’s Fair in New York City.

1975 - The last Americans evacuate Saigon as South Vietnam surrenders to the Vietcong.

posted by The Catechizer and The Deacon | 6:03 AM