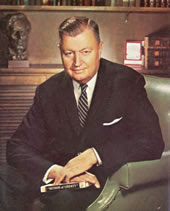 The son of a Presbyterian minister, McIntire followed his mentor, J. Gresham Machen, to Westminster Seminary (where he graduated in 1931) and into the Orthodox Presbyterian Church at its founding in 1936. Soon, however, he would have a falling out with Machen and the "un-American" theology emanating from Westminster, represented in the likes of R. B. Kuiper, John Murray, Ned Stonehouse, and Cornelius Van Til. In 1937 he led an exodus from the OPC and formed the Bible Presbyterian Church and Faith Theological Seminary, committed to a more rigorous form of separatism.

McIntire's fiery combination of fundamentalist theology and conservative politics expanded steadily in popularity during the height of the America's cold war. His Collingswood, New Jersey, church grew to 1,200 members, his Christian Beacon newspaper claimed 100,000 subscribers, and his "Twentieth Century Reformation Hour" was broadcast on over 600 radio stations. Through these media he took on Catholics, communists, and evangelicals " especially Billy Graham. McIntire also led in the formation of the American Council of Christian Churches (1941) and the International Council of Christian Churches (1948).

Eventually, several church splits (largely stemming from his domineering personality) and legal battles with the FCC would greatly diminish his following. He retired after over 60 years in the ministry, and he died on March 20, 2002, at the age of 95.

posted by The Catechizer and The Deacon | 6:01 AM