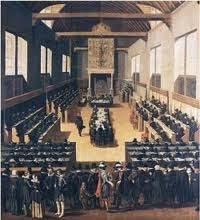 On May 29, 1619, the Synod of Dort was adjourned at the conclusion of its one hundred eightieth session.

Convened on November 13, 1618, in the Dutch city of Dordrecht, the international Reformed council answered the Arminian heresy through its canons, arranged according to five heads of doctrine, that affirmed the sovereignty of God in salvation. Contrary to popular modern impressions, the Canons of Dort were not a “rigid statement of monolithic Calvinism,” according to Robert Godfrey. Instead, they should be understood as “a moderate, inclusive compromise drawing all Calvinists together around the essentials of the faith and preventing the movement from fragmenting over peripheral matters.”

The Canons of Dort joined the Belgic Confession and the Heidelberg Catechism as the three-fold doctrinal standard in the Dutch Reformed tradition. In analyzing the significance of the Synod, Cornelius Van Til wrote, “The followers of Dort, together with their brethren, the followers of Westminster, alone have the wherewithal with which to proclaim the gospel of the sovereign grace of God at all.”

posted by The Catechizer and The Deacon | 6:17 AM