Word of the Day: Jubilarian

Jubilarian: A person who celebrates or has celebrated a jubilee, as a nun observing 25 or more years of religious life.

Quotes:
To enable the school to open in 1916, Sisters Agnes Geraghty and Corona Hargrafen, golden jubilarians , had come out of retirement, and Sister Juliana Kritenbrink, another golden jubilarian, joined them the next year.
-- O. P. Dolores Enderle, Suzanne Noffke, The Dominicans of Racine, Wisconsin

The crowd was so great that when the doors were closed at a late hour to relieve the strain on the seventy-two-year-old jubilarian, a line of people still reached around the south and west sides of the Square.
-- Patrick Ryan, Archbishop Patrick John Ryan His Life and Times

Origin:
In Biblical tradition, the jubilee is a yearlong celebration which occurs every 50 years. All debts are forgiven and lands returned to their original owners. Today jubilees are often celebrations of significant anniversaries, particularly every 25, 50, 60 or 75 years. Jubliarian refers to anyone who has or is celebrating a significant 25-year milestone.

Rick Warren and Your Chance of a Lifetime!

I’ve discovered some disturbing news. We’ve missed the chance of a life time, a chance at “making Christian history.” And if that weren’t bad enough, we’ve also missed our chance at a once-in-a-life-time event: to be photographed with Rick Warren. [Insert bobbysoxer screams here.]

“But how, Mr. Catechizer, could I ever attain such an honor?” It’s simple. Just join Saddleback Church.

But wait! There’s even more!

In Rick Warren’s own words, here’s eight reasons to join his church . . .

3. You'll get a free one year subscription to Purpose Driven Connection magazine. (Never offered before)

4. You'll get free copy of The Purpose Driven Church book.

5. Your name will be included in the historical list of Saddleback Pioneer Members who joined in our first 30 years. (This Easter is our 30th Easter and I want you included in this list.)

7. You'll be a part of making Christian history! The largest membership class ever!

8. We love you & want you in our family. There is no good reason to procrastinate.

But alas, we’ve missed our chance to fawn over pastor Warren (and lost-out on the free Ginsu knives). But never fear! I hear that Justin Bieber is on tour. 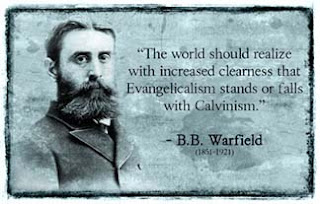 Here's something interesting from Time Magazine: 10 Ideas Changing the World Right Now. Why is it interesting? Calvinism appears in the number three spot. Here's an excerpt . . .

Calvinism, cousin to the Reformation's other pillar, Lutheranism, is a bit less dour than its critics claim: it offers a rock-steady deity who orchestrates absolutely everything, including illness (or home foreclosure!), by a logic we may not understand but don't have to second-guess. Our satisfaction — and our purpose — is fulfilled simply by "glorifying" him. In the 1700s, Puritan preacher Jonathan Edwards invested Calvinism with a rapturous near mysticism. Yet it was soon overtaken in the U.S. by movements like Methodism that were more impressed with human will. Calvinist-descended liberal bodies like the Presbyterian Church (U.S.A.) discovered other emphases, while Evangelicalism's loss of appetite for rigid doctrine — and the triumph of that friendly, fuzzy Jesus — seemed to relegate hard-core Reformed preaching (Reformed operates as a loose synonym for Calvinist) to a few crotchety Southern churches.

No more. Neo-Calvinist ministers and authors don't operate quite on a Rick Warren scale. But, notes Ted Olsen, a managing editor at Christianity Today, "everyone knows where the energy and the passion are in the Evangelical world" — with the pioneering new-Calvinist John Piper of Minneapolis, Seattle's pugnacious Mark Driscoll and Albert Mohler, head of the Southern Seminary of the huge Southern Baptist Convention. The Calvinist-flavored ESV Study Bible sold out its first printing, and Reformed blogs like Between Two Worlds are among cyber-Christendom's hottest links.

There is a mysterious longing in the heart of God that is captured in the words, “Everyone who calls on the name of the Lord will be saved” (Rom. 10:13; see Joel 2:32). Without prejudice to any, without restricting his benevolence to only a few, God does not want anyone to perish, “but that all should reach repentance” (2 Pet. 3:9).

The mystery for us is contained in the distinction between what God has decreed and what he has revealed in Scripture. We know from Scripture that God has decreed, irrevocably and forever, which ones will receive his electing love and thus be saved (Rom. 9:18). But Scripture also makes plain that God takes no pleasure in the death of the wicked but rather that they turn from their wickedness and live (Ezek. 33:11). If there is joy in heaven over one sinner who repents, there is no equal joy over one who des not. God longs intensely for individual men and women to repent and believe the gospel, even if they never do. We cannot fathom this mystery; we must embrace it.

The Mystery of the Gospel

Here is the mystery of the free offer of the gospel. Without distinction and with no strings attached. It is universal. Literally anyone who calls upon the name of the Lord will be saved. Jew or Gentile, white or black, European or Asian, the subject is the same. No special privilege is granted to any. It is uniform in its method. The one thing required of everyone is to call upon the Lord’s name. Acknowledge that he alone saves and ask him to save you. It is unerring in its results. Whoever calls will be saved, period. There is no mincing of words here, no hidden clauses.

But what if he’s not elect? First, we don’t know who the elect are, and it’s none of our business to figure it out (Deut. 29:29). Second, even if someone isn’t elect, God longs for him anyway. Jesus wept over a non-elect Jerusalem; he longed for her, though she refused him. There is the heart of God, if you need proof. Is it your hear too? 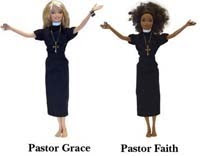 Here we pick up where we left off in the debate. Before that, though, I would like to mention that having this discussion with one of my former Pentecostal pastors (he is still of that persuasion) was quite a breakthrough. When I left the fellowship (and Pentecostalism) the pastors announced to the church that I was demon possessed and that no one was allowed to talk to me. So please pray that God will continue to open doors such as this, for this man is quite influential in his circles, and his wife (my wife’s former best friend) is a popular recording artist; so a change towards orthodoxy could positively affect others.

The Bible does make it very clear that women are to play essential roles in local church ministry and thank God we have had the privilege to see the fruit of Grace working within submitted women Pastors already in our church. Roles for women in the church are visible in biblical times to the dawning of the 21st century and women as I know you agree have always played key roles in the church. In my opinion, New Testament scripture in the Bible still presents a pattern for service with women in roles of ministry oversight. Many churches in our generation use terms as Director, Overseer, coordinator or minister as a title used to describe a woman in a role of oversight. Even though these titles can be appropriate for those who do not have the calling or gift to Pastor, sometimes these titles given to women are just a politically right term defining their Pastoral role over a specific ministry within the church.

We do agree that women can have very fruitful and valuable ministries. And I think you’re right that sometimes churches make women pastors and then just call them something else. This brings us to something else to consider: women pastors is a modern issue. In the Old Testament the priest were men. In the New Testament there are no examples of women pastors, and Paul excludes them by limiting the role to men in his “overseer” instructions of Timothy and Titus. It wasn’t until the last few generations that this started gaining traction, until women were pressing for more civil rights. (Something to chew on.)

In my opinion when The Apostle Paul challenged the women to be silent, not to teach or not to have authority, It was to re-establish Godly order and to detour those who were being disruptive or insubordinate to the authority of Godly men in the church NOT to set the rule of NO WOMEN PASTORS.

There is no indication that Paul restricted women in their callings to specific GIFTS before God for the service of the church. Throughout Paul’s ministry he speaks of women as his co-laborers in the gospel and in Romans 16:7 it says "Salute Andronicus and Junia (feminine), my kinsmen, and my fellow prisoners, who are of note among the apostles, who also were in Christ before me." Here we can see confirmation in the Bible that Paul had women working Key roles with the original apostles as well as Priscilla in Acts 18:26 & Romans 16:3.

In his letter to the Romans 16:1-2, Paul commends Phoebe a woman deacon, to the church of Rome. He is sending her himself as a minister of the gospel. The Greek word for “servant” is diakonos, a deacon. It implies that Phoebe had the same status in the early church as Stephen the martyr and Philip the evangelist. In speaking of Phoebe Paul also charges the Church to serve her with anything she would have need of to accomplish her business or in other words – ministry. This implies that she as a woman was sent with authority to fulfill a certain mission. Throughout the centuries, God has raised up remarkable women in the Body of Christ to places of leadership. They have stood in the five fold ministry of the church as apostles, prophets, evangelists, pastors and teachers. As I mentioned to you before according to Ephesians 4:11-“ It was He who gave some to be Apostles, some to be prophets, some to be evangelists, and some to be Pastors and Teachers.”

We agree that women can have wonderful ministries. And yes, in modern times, women have served as pastors. The question is, should they serve? And that question isn’t answered by quoting Eph. 4:11, which simply teaches that God provides ministers. If we want to find out the qualifications for those ministries, pastors in this case, then we must go to the Scriptures that provide us with that information: 1 Tim. and Titus.

On a final note, My brother- and sister-in-law also attended that fellowship (it’s where we all met as teenagers). When my wife and I left, the pastors met with my in-laws and acknowledged that there would be occasions that they, my in-laws, would have to talk to me; so they were forbidden to talk to me about the bible—they misjudged my brother-in-law terribly. He immediately called me and requested a meeting to go over the Scriptural case for my departure. Today he is a deacon in the Reformed Church of the United States.

Labels: Doctrine of the Church