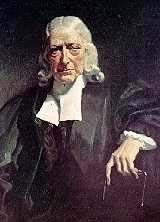 Fred Sanders cautions Calvinists against throwing the baby out with the bath water when it comes to John Wesley, co-founder of the Methodists movement. Here’s how he begins his worthy admonishment at The Scriptorium:

Calvinists sometimes behave as if their Reformed credentials give them a free pass to forget there ever was a John Wesley, or that he is to be reckoned one of the good guys, or that he, being dead, yet speaks. They keep their distance as if Wesley were the carrier of a theological disease, to be given a wide berth. It’s one thing to say (as any good Calvinist must) that Wesley was wrong about a few important doctrines. But it’s another thing, a little tragic, to consign him to oblivion and imagine there is nothing to learn from him. Here are some Calvinists who know better. Their essentially pro-Wesley tone is striking, possibly because it’s becoming rarer than it once was.

John Newton (1725-1807) was as young, restless, and Reformed as anybody, but he could testify of John Wesley, “I know of no one to whom I owe more as an instrument of divine grace.” This line is quoted in Iain H. Murray’s book, Wesley and Men Who Followed (Edinburgh: Banner of Truth Trust, 2003), p. 71. Murray himself (b. 1931) is a great example of a Calvinist who unflinchingly opposes Arminianism, but is fully aware of how much spiritual blessing he has received through Wesley and the Methodists. Murray knows what the main things are, and knows that Wesley was sound on them, even though he was off the ranch on the beloved “doctrines of grace” as the Reformed see them: “the foundation of Wesley’s theology was sound. On the objective facts of the salvation revealed in Scripture –Paul’s ‘first of all’ of 1 Corinthians 15:3—Wesley was clear.”

You can read the rest of the article here.

The Mark of the Beast 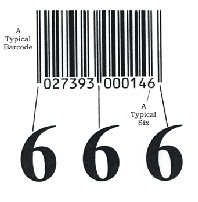 [The mark of the beast] What is it?
Many Christians believe the 666 mark will be a biochip implant to create the cashless society of Revelation 13.

Why is it so bad?
All who take the mark will be damned by God to be cast into the Lake of Fire.

Why will those who take the mark be damned?
I think it's because God made Silver and Gold as honest weights and measures to be used as money!

Money is NOT paper (which is a promise), not electronic credits, not chips, not a mark, nor a number!

The Use of Paper Money Violates All of the Ten Commandments

When I was a young, starry-eyed Dispensationalist I was told that pet-tracking implants, scanners used in grocery stores, and Disneyland’s admission hand-stamp were all preparing us for the mark of the beast.

William Hendriksen (1900 – 1982), former professor of New Testament literature at Calvin Theological Seminary, provides a much more biblical explanation of the mark in his book More Than Conquerors. Committed Christian provides a fine summary of Dr. Hendriksen’s explanation over at the Against the Current blog. Here’s how she kicks things off :

William Hendriksen discusses in his book, More Than Conquerors, the mark of the beast. As an amillennialist, Hendriksen has a different understanding of it than many evangelical Christians. But his interpretation is definitely worth considering because it is based on the understanding that Jesus has conquered sin, death, and the devil for His people. The mark 666 symbolizes the failure, upon failure, upon failure of Satan, his demons, and all who persecute the Church in one form or another, to accomplish their mission to defeat the Church.

Hendriksen arrives at this understanding by first explaining what the first and second beast of Revelation 13 represent. Both beasts are the "agents, instruments, or tools which the dragon [Satan] uses in his attack upon the Church" (pg 144). The first beast represents "the persecuting power of Satan operating in and through the nations of this world and their governments" and the second "the false religions and philosophies of this world" (pg 144). Chapter 14 of Revelation also speaks about Babylon which is representative of "antichristian seduction" (pg 144). Revelation 13 reveals that many have the mark of the beast since they belong to Satan. By nature all people are children of the devil. Paul reminds the Ephesian church who they were before Jesus saved them. . . . 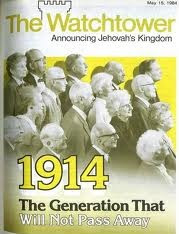 My wife was raised Jehovah’s Witnesses. In their view, the 144,000 mentioned in Rev. 7:4 are an “anointed” group selected by god since Pentecost. Those who died before 1918 were resurrected as spirit beings that year, while those who died after 1918 but before 1935 were likewise resurrected and taken to heaven. They will rule as special kings and priests to god while the rest live in an earthly paradise. Nobody gets the golden ticket to heaven but them.

After she escaped the Watchtower, one of the things she wondered about was who were the 144,000? Our first church was Word of Faith Pentecostal, which holds to a Dispensational view of end times. Their answer to the question was that these were Jews who were saved during the seven year tribulation. Since we escaped the Name-it-claim-it-tower, Eschatology has occupied the lower rung on the “things I need to study” ladder. Consequently, I haven’t given much thought to the 144,000.

So it is with great appreciation that I found an excellent answer to the 144,000 question over at Pastor Kevin DeYoung’s blog, where he offers five reasons why both the JWs and the Dispensationalists got it wrong. Here’s how he begins:

Many sincere Bible-believing Christians would understand the 144,000 like this: The church is raptured prior to the great tribulation. During the time when the church is gone, a remnant of 144,000 ethnic Jews is converted (12,000 from each tribe). These Jewish converts, in turn, evangelize the Gentiles who make up the great multitude in white robes in v. 9. That’s one understanding of Revelation 7. A lot of godly people hold that understanding. Let me explain why I understand the 144,000 differently.

The 144,000 are not an ethnic Jewish remnant, and certainly not an Anointed Class of saints who became Jehovah’s Witnesses before 1935. The 144,000 represent the entire community of the redeemed. Let me give you several reasons for making this claim. . . .

You can read the five brief, but succinct, reasons here.

The Wit and Wisdom of C. H. Spurgeon 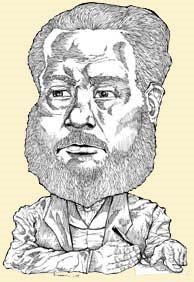 The heaviest end of the cross lies ever on His shoulders. If He bids us carry a burden, He carries it also.

As well might a gnat seek to drink in the ocean, as a finite creature to comprehend the Eternal God.

Few preachers of religion do believe thoroughly the doctrine of the Fall, or else they think that when Adam fell down he broke his little finger, and did not break his neck and ruin his race.

I am certain that I never did grow in grace one-half so much anywhere as I have upon the bed of pain.

The heart of Christ became like a reservoir in the midst of the mountains. All the tributary streams of iniquity, and every drop of the sins of his people, ran down and gathered into one vast lake, deep as hell and shoreless as eternity. All these met, as it were, in Christ’s heart, and he endured them all.

I would rather lay my soul asoak in half a dozen verses [of the Bible] all day than rinse my hand in several chapters.

There is dust enough on some of your Bibles to write damnation with your fingers.

It is a grand thing to see a man dying full of life . . . God makes his dying people to be like the sun, which never seems so large as when it sets.

A sermon wept over is more acceptable with God than one gloried over.

The most useful members of a church are usually those who would be doing harm if they were not doing good.

The Origin of Calvinism 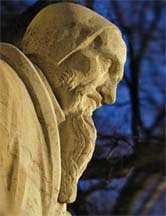 Pastor John Piper has once again rendered service to the church by penning a short article for Table Talk titled, The Orgin of Calvinism. Here's how it begins . . .

Of course, like every other man besides Jesus Christ, John Calvin was imperfect. His renown is not owing to infallibility but to his relentless allegiance to the Scriptures as the Word of God in a day when the Bible had been almost swallowed up by church tradition. He was born in July 1509, in Noyon, France, and was educated at the best universities in law, theology, and classics. At the age of twenty-one, he was dramatically converted from tradition-centered medieval Catholicism to radical, biblical, evangelical faith in Christ and His Word. He said:

"God, by a sudden conversion subdued and brought my mind to a teachable frame, which was more hardened in such matters than might have been expected from one at my early period of life. Having thus received some taste and knowledge of true godliness, I was immediately inflamed with so intense a desire to make progress that although I did not altogether leave off other studies, I yet pursued them with less ardor."

There is a reason why Calvin moved away from his classical studies to a life devoted to the Word of God. Something dramatic happened in his perception of reality as he read the Scriptures for himself. He heard in them the voice of God and saw the majesty of God . . .

You can read the rest here.