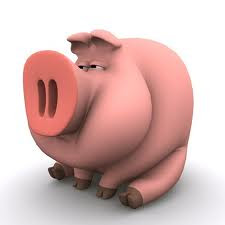 Did you ever wonder where the term “go the whole hog” came from? Probably not. But in case you ever find yourself a contestant on Jeopardy, here’s the skinny from A Phrase a Week:

To perform some act or adopt some opinion fully and thoroughly.

'Go the whole hog' is an American expression. Whilst the word 'hog' has been in use in England since the 14th century, by the time that the phrase was coined, 'hog' had been largely superseded there by 'pig'. No one in the UK 'went the whole hog' until the phrase migrated east from the USA in the 1830s.

The expression derives from a rather obscure satirical work by the English poet and hymn writer, William Cowper. Written at a time when Christian authors felt no misgivings about poking fun at other religions, the piece teases Muslims over the supposed ambiguity of the restrictions against eating pork as specified in the Qur'an. The gist of the poem is that, while sampling each part of a hog to test which part wasn't permissible to eat, the whole hog is eaten.

The Love of the World Reproved: or, Hypocrisy Detected, William Cowper, 1782:

Thus says the prophet of the Turk;
Good musselman, abstain from pork!
There is a part in every swine
No friend or follower of mine
May taste, whate'er his inclination,
On pain of excommunication.

Much controversy straight arose,
These choose the back, the belly those;
By some 'tis confidently said
He meant not to forbid the head,
While others at that doctrine rail,
And piously prefer the tail.
Thus, conscience freed from every clog,
Mahometans eat up the hog.

Cowper may have had only a loose grasp of Islamic theology, but he did influence others who later took up the phrase 'the whole hog' to mean 'the whole thing'.

You can read the rest of the story here.

posted by The Catechizer and The Deacon | 5:32 AM