f The Wittenberg Door: Should the Church Get Out of the Marriage Business?

Should the Church Get Out of the Marriage Business? 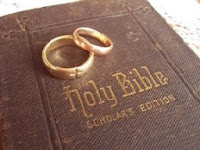 The State’s primary interest in marriage is that it is the best way for it, the State, to perpetuate itself. Mommies and daddies are from where the next generation of citizens will come. And the best environment for the raising of responsible citizens is a married, monogamist, heterosexual household. Married and monogamist because that brings stability to the home; heterosexual because both the mother and the father bring something in particular to the childrearing enterprise.

This unit is the best way to secure society’s future. Therefore, the State has an interest in favoring and protecting marriage between a man and a woman. It has no such interest in same-sex unions.

The above is my public policy argument against the redefinition of marriage. It’s meant to protect the institution from attacks by secular forces. But this argument does not protect marriage from forces within the church . . .

Christians are frequently tempted to excuse themselves from the kerfuffle over same-sex marriage by insisting that the church should get out of the marriage business altogether. Many suggest that we should separate the conception of marriage into the "sacred" and the "secular." These evangelicals aren't questioning the Scripture's teaching on homosexuality. Some Christians just want to bypass debate and focus on weightier matters within the church's walls—like preserving the theology of marriage from being corrupted by democratic fiat.

This argument assumes that Christians can maintain and safeguard their own definition of marriage by refusing to impose a particular viewpoint in the public square. Often with good intentions, some Christians wish to privatize marriage into a strictly ecclesial practice, treating it like we would the Lord's Supper or baptism.

So now we are in a place where arguments against both sides are needed. Andrew Walker, director of policy studies at the Ethics and Religious Liberty Commission of the Southern Baptist Convention, provides a thoughtful response to those Christians who think it’s best for the church to get out of the marriage business. Here’s an excerpt . . .

While marriage may be ultimately Christian, it's not exclusively Christian. Arguments that conflate theological meaning with direct public application ignore this division and treat a theology of marriage as akin to a theology of baptism. How a church administers baptism, however, is an ecclesial ordinance where the church marks out its members. The same cannot be said about marriage. It is entirely permissible for the government to uphold a view of marriage that comports with theological truth, but that is not held or promoted for theological reasons.

When we speak of marriage as only a theological construct, we do a disservice to the institution's public significance. There aren't two kinds of marriage—one secular, one sacred. There's only one marriage with one purpose, regardless of how different religious traditions handle or interpret the institution. Government does not uphold a particular theological interpretation of marriage; it upholds a view of marriage that differing theological and non-theological systems rightly accommodate. That's why civilizations across human history—some of them irreligious—have acknowledged marriage.

posted by The Catechizer and The Deacon | 6:30 AM