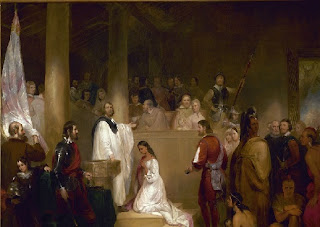 Much legend surrounds the life of Pocahontas, but the known facts are remarkable enough. Born around the year 1595 to Powhatan, chief of a powerful tribe, she was about twelve years old when English colonists founded Jamestown, Virginia. According to Captain John Smith, it was Pocahontas who saved him when the Indians took him prisoner. Just as the executioners were about to bash in his head, Smith wrote, Pocahontas “got his head in her arms, and laid her owne upon his to save him from death.”

Some scholars have suggested that what Smith took to be an “execution” was really a ceremony of some kind. At any rate Powhatan set Smith free, and young Pocahontas became a frequent visitor to Jamestown, sometimes bringing food to the hungry settlers. Her friendly nature (her name means “playful one”) made her a favorite among the colonists.

A few years later, after Smith left for England, the settlers kidnapped the Indian maiden, intending to hold her until her father returned some prisoners and stolen supplies. During her captivity, Pocahontas converted to Christianity and was baptized as Rebecca. With her father’s consent, she married colonist John Rolfe, and the couple had a boy, Thomas. The marriage helped bring peace between the Indians and settlers.

In 1616 the Rolfes sailed to England to help promote the Jamestown colony. There the Indian “princess” was treated as a celebrity and welcomed at royal festivities. But she grew ill and died just before she was to return to Virginia. She was buried on March 21, 1617, in the town of Gravesend.

Pocahontas’s story has been told a hundred ways in books, poems, plays, and movies. She was undoubtedly a courageous young woman who tried to bring friendship between two peoples. Captain Smith may have left the best tribute when he said she was “the instrument to [preserve] this colonie from death, famine, and utter confusion.”

1617 - Pocahontas, who died just before she was to begin her return voyage to Virginia, is buried in Gravesend, England.

1980 - President Jimmy Carter announces the United States will boycott the Moscow Olympics in response to the Soviet Union’s invasion of Afghanistan.

posted by The Catechizer and The Deacon | 6:15 AM