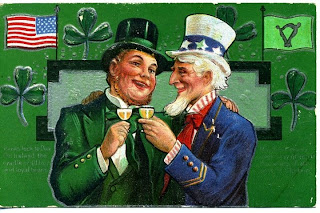 Saint Patrick, a fifth-century missionary born in Roman Britain, became the patron saint of Ireland by spreading Christianity throughout the Emerald Isle. For centuries the Irish have set aside a day to remember him. But the version of St. Patrick’s Day that Americans know, which celebrates all things Irish with parades, parties, and “putting on the green,” was invented chiefly in our own country.

And no wonder. Some 36 million Americans claim Irish ancestry—almost nine times as many people as the population of Ireland itself.

Irish settlers, many of them indentured servants, brought the custom of remembering Saint Patrick to the American colonies. Boston held its first observance in 1737. In New York City, Irish soldiers in the British army held a parade on St. Patrick’s Day 1762. During the Revolutionary War, George Washington allowed his troops camped at Morristown, New Jersey, many of whom were Irish descent, to have a holiday on March 17, 1780.

In the nineteenth century, as millions more Irish immigrants arrived, including those fleeing the Great Potato Famine, St. Patrick’s Day observances became more widespread. Over time the day became less a remembrance of the saint himself, and more a way to remember Irish heritage, often with flair (as in Chicago, where the city dyes the Chicago River green).

From Davy Crockett to Bing Crosby, Americans with Irish roots have shaped out history and culture. By some estimates, one-third to one-half of American troops in the Revolutionary War were of Irish descent, as were 9 of the 56 signers of the Declaration of Independence. As many as 19 presidents, including Andrew Jackson, John F. Kennedy, and Ronald Reagan, have had Irish ancestors. If the United States is the world’s melting pot, the broth has a wee bit o’ the taste of Irish stew.

1737 - The Charitable Irish Society of Boston holds the first public celebration of St. Patrick’s Day in the American colonies.

1959 - The USS Skate becomes the first submarine to surface at the North Pole.

posted by The Catechizer and The Deacon | 6:12 AM