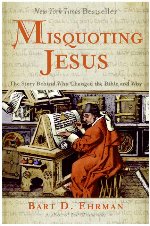 I was at Costco the other day and came across this new book, Misquoting Jesus, among the other Christians-have-been-sold-a-bill-of-goods books now in vogue. I won’t be reading the book, for I haven’t the background in textual criticism needed to properly dispel its claims. But, thanks be to our Lord that we have men like Michael Kruger, Associate Professor of New Testament at Reformed Theological Seminary in Charlotte, NC, to bring his learned guns to bear over at the Reformation 21 site upon these modern gainsayers.

Purpose of the Book

In his book review, Professor Kruger explains author’s agenda behind the book:

In contrast to many of Ehrman’s prior works, Misquoting Jesus is written for a more popular audience and begins not with a survey of academic works on the subject but with somewhat of a personal "testimony" from Ehrman himself, cataloging his transition (or transformation) from naïve evangelical at Moody and Wheaton to enlightened scholar at Princeton Seminary. He describes how it was his early studies in textual criticism, and his subsequent awareness of scribal "mistakes," that first alerted him to the fact that his view of inerrancy might be flawed. Having finally admitted that the Bible has errors and mistakes, Ehrman said that the "floodgates opened" and he began to radically change his view of the Bible, concluding that the Bible was "a human book from beginning to end" (11). Ehrman’s personal testimony in the introduction, although interesting, strikes the reader as rather out of place for a piece of scholarship coming from the secular academy—after all, are not evangelicals prohibited from appealing to their personal experience in their scholarly works? Ironically, as Ehrman distances himself from his evangelical past, he actually engages in a sort of reverse-evangelism with the reader, hoping to convince any readers who are "literalists" (14), "fundamentalist" types (6), and "one-sided" (13) that they should reconsider their view of Scripture and adopt his own. Erhman’s appeal to his personal journey, if nothing else, gets his agenda for this book squarely on the table: to use the field of textual criticism as a means to challenge the evangelical doctrine of Scripture.

How the Book is Divided

Professor Kruger points out that, although the book is divided into seven parts, Ehrman’s actual argument can be best conceived of in three parts.

Professor Kruger closes-out his review with an explanation as to the core problem with Ehrman’s book:

Ehrman is working with his own self-appointed definition of inspiration which sets up an arbitrary (and irrational) standard that could never be met. Does inspiration really require that once the books of the Bible were written that God would miraculously guarantee that no one would ever write it down incorrectly? Are we to believe that inspiration demands that no adult, no child, no scribe, no scholar, not anyone, would ever write down a passage of scripture where a word was left out—for the entire course of human history? Or is God prohibited by Ehrman from giving revelation until Guttenberg and the printing press? (But there are errors there too.) Would Ehrman have been more pleased if the New Testament were delivered from heaven on golden tablets, and not through normal historical processes? I imagine he would then object to the fact that the New Testament does not bear the "marks of history." It seems clear that Ehrman has investigated the New Testament documents with an a priori conviction that inspiration requires zero scribal variations—a standard that could never be met in the real historical world of the first century. Ironically, as much as Ehrman claims to be about real history, his private view of inspiration, by definition, prevents there from ever being a New Testament from God that that would have anything to do with real history. Not surprisingly, therefore, Ehrman’s book "concludes" that the New Testament could not be inspired. One wonders whether any other conclusion was even possible.

Professor Kruger’s review is excellent, but long, especially where he answers each of Ehrman’s arguments. It is, however, most certainly worth the time. You can read it in its entirety here.

What is known as the "Great Schism" began in 1309 when Pope Clement V moved his papacy to a city, Avignon, just outside of French territory. The papacy remained there until 1377 when Pope Gregory XI returned it to Rome. Although the papacy was back in Rome, it still had a Frenchman at the helm.

Upon Gregory's death, a Roman pope was elected. This, of course, didn't sit well with the French bishops, so, in 1378, they elected their own pope who would rule in Avignon. Europe was now divided between the two popes. How did the two pontifs respond to the crises? They excommunicated each other. The schism lasted until 1415.

In Wycliffe's mind, this comedy of errors could not illustrate his message of reform any better. The excommunications added flames to his pen and feet to his message. Wycliffe was now a "radical" for reform.

Wycliffe knew that the only way to achieve true reform was to put God's word into the hands of the people. This of course was forbidden by the Roman Catholic church. In 1382, upon peril of his life, Wycliffe completed his English translation of the bible. He and his followers, known as Lollards, began distributing it to the English-speaking people. This was the first European translation of scripture in more than 1,000 years.

The Archbishop of Canterbury responded by having Wycliffe and his writings condemned. Wycliffe, however, remained undaunted and continued writing until his death (of natural causes) in 1384.

Rome was determined to stamp out the Lollards and Wycliffe's memory. A law was passed which condemned Wycliffe and his followers as heretics. The sentence was burning. Across Europe, the flames were ignited and the Lollards were all but destroyed. Those who survived the wrath of Rome operated in secret until the Reformation.

Rome was not finished with Wycliffe either: 44 years after his death, the pope ordered Wycliffe's bones exhumed, burned, and his ashes scattered. 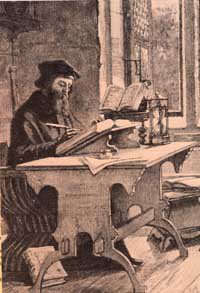 John Wycliffe was one of the firebrands of Church history. Known as the “morning star of the Reformation," John Wycliff preceded Luther, Calvin, and Knox by almost two hundred years.

Except for the year of his birth, 1320, not much is known of the young Englishman until he received his doctorate from Oxford in 1372. After receiving his degree, Wycliffe was thrust into prominence by being granted a professorship and becoming a leading scholar at the university.

Any quiet scholastic days he might have had were short lived. A debate erupted regarding who had God given the right to rule over men, and how is that right to be exercised. Wycliffe dove headfirst into the debate by arguing that the civil government had the divine right to correct the abuses of sinful church leaders. According to Wycliffe, the civil magistrate even had the right to seize the corrupt churchmen's property.

Wycliffe, though, was just getting started. His message of reform included the following:

As a consequence of his calls for reform, Wycliffe was expelled from his teaching post. Then, in 1377, Pope Gregory XI condemned Wycliffe’s doctrines and writings and called for his arrest. Wycliffe, however, remained unmolested due to the protection of influential friends.