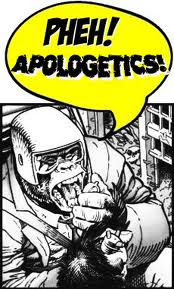 The Gospel Coalition has posted a series of articles about apologetic methodology. The three major schools were represented: Classical, Evidential, and Presuppositional. The Aristophrenium provides a handy list and links to each of the respective articles here.

Being of the Van Tilian Presuppositional stripe, one of the articles that piqued my interest was Dr. Paul Copan’s challenge to the Covenantal approach, particularly his charge of question begging. Reason being, this was my main objection when I was still in the Evidential camp. Dr. Oliphant answers this objection and the others Dr. Copan raises in his article titled, Answering Objections to Presuppositionalism. Here’s part of his answer to the question begging charge:

Van Til is not advocating fallacious reasoning here. Though much more needs to be said, a couple of points should be remembered when Van Til wants to affirm circular reasoning:

(1) Circular reasoning is not the same as a circular argument. A circular argument is one in which the conclusion of the argument is also assumed in one or more of the premises. Van Til's notion of circularity is broader, and more inclusive, than a strict argument form. For example, in William Alston, The Reliability of Sense Perception (Ithaca: Cornell University Press, 1993), Alston argues that it is impossible to establish that one has knowledge in a certain area without at the same time presupposing some knowledge in that area. His example is an argument for the reliability of sense perception. Any argument for such reliability presupposes that reliability. And it does so because of the epistemic situation in which human beings exist. Alston is right here, it seems. Not only so, but, to go deeper, the epistemic and metaphysical situation in which human beings exist is one in which the source of and rationale for all that we are and think is, ultimately, in the Triune God of Scripture. Circularity in this sense is inevitable. We will never be outside the context of image of God as we think and live---not in this life or the next.

(2) Van Til's affirmation of circular reasoning should be seen in the context of the point he makes in various places about "indirect" arguments. Any petitio principia is, by definition, a direct argument---containing premises and a conclusion. Van Til's indirect method moves one out of the context of a strict proof or direct argument, and into the context of the rationale for any fact or law assumed to be, or to be true. Thus, circularity is inextricably linked to the transcendental approach, and is not meant to be in reference, strictly speaking, to direct argumentation.

Only one great English poet went mad, Cowper. And he was definitely driven mad by logic, by the ugly and alien logic of predestination. Poetry was not the disease, but the medicine; poetry partly kept him in health. . . . He was damned by John Calvin; he was almost saved by John Gilpin.

G. K. Chesterton’s Orthodoxy is a wonderful book. His insight, clarity of thought, and turn-of-phrase make him a writer with few peers. One thing I’ve always wondered about, though, was his virulent anti-Calvinism. And it wasn’t just that he hated Calvinism; many do. But what was troubling was that his description of Calvinism bore little resemblance to the real McCoy.

Pastor John Piper also shares my affinity for Chesterton and his book Orthodoxy. In a post at the Desiring God blog he explains why Chesterton’s view of Calvinism doesn’t bother him. Here’s an excerpt:

Here’s the reason Chesterton’s bowshots at Calvinism do not bring me down. The Calvinism I love is far closer to the “Elfland” he loves than the rationalism he hates.

He would no doubt be baffled by my experience. For me the biggest, strongest, most beautiful, and most fruitful tree that grows in the soil of “Elfland” is Calvinism. Here is a tree big enough, and strong enough, and high enough to let all the paradoxical branches of the Bible live — and wave with joy in the sunshine of God’s sovereignty.

In the shade of this tree, I was set free from the procrustean forces of unbiblical, free-will presuppositionalism — the unyielding, alien assumption that without the human right of ultimate self-determination human beings cannot be accountable for their choices. When I walked away from this narrow, rationalistic, sparse tree, into the shade of the massive tree of Calvinism, it was a happy day. Suddenly I saw that this is what all the poetry had been about. This is the tree where all the branches of all the truths that men have tried to separate thrive. 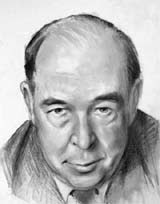 There have been times when I think we do not desire heaven; but more often I find myself wondering whether, in our heart of hearts, we have ever desired anything else. . . . It is the secret signature of each soul, the incommunicable and unappeasable want, the thing we desired before we met our wives or made our friends or chose our work, and which we shall still desire on our deathbeds, when the mind no longer knows wife or friend or work. . . . All your life an unattainable ecstasy has hovered just beyond the grasp of your consciousness. The day is coming when you will wake to find, beyond all hope, that you have attained it.

The Problem of Pain