f The Wittenberg Door: The Nazi at the Door – Considering Moral Dilemmas

The Nazi at the Door – Considering Moral Dilemmas 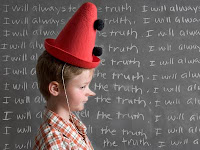 We, as God’s people, are required to think His thoughts after Him. This is no small task. This means that we have to face tough moral and theological questions carefully and thoughtfully, all the while not surrendering the sure foundation of God’s Word. It's against this backdrop that I broach the topic of today’s post: moral dilemmas.

A note of warning: this topic carries with it a certain amount of controversy. For that reason I remind you to "Test all things; hold fast what is good" (1 Thessalonians 5:21).

You are on the horns of a moral dilemma if you are caught between competing moral requirements. Here is the most common modern example:

Dilemma: The only way to protect the innocent is to lie.

Some characterize this as “choosing between two evils.” But this characterization is false. God will never put us in a situation where we can’t please Him, where we must sin.

No temptation has overtaken you but such as is common to man; and God is faithful, who will not allow you to be tempted beyond what you are able, but with the temptation will provide the way of escape also, so that you will be able to endure it.

15) For we do not have a high priest who cannot sympathize with our weaknesses, but One who has been tempted in all things as we are, yet without sin.

16) Therefore let us draw near with confidence to the throne of grace, so that we may receive mercy and find grace to help in time of need

Although Christ was not specifically tempted with Nazis at the door, He did face every kind of temptation. Each temptation met its defeat. Based on Christ’s triumph, and the Corinthian passage, we can conclude that any particular instants of sin can be overcome by the believer. Since sin can always be resisted, we’ll never face a “no win situation” morally.

This is true, but this savors of a carnal heart to think that you must choose one sin rather than another. You must not choose any of them! Both of them are evil, though one may be less evil than another.

The Ninth Commandment forbids lying (Ex. 20:16). But are we to take from this passage that all lying is forbidden? To answer that question we must first remember that the Ten Commandments are but a summary of God’s Law. To be faithful, we must take into account all of what God's Word says.

1) Now the LORD said to Samuel, "How long will you grieve over Saul, since I have rejected him from being king over Israel? Fill your horn with oil and go; I will send you to Jesse the Bethlehemite, for I have selected a king for Myself among his sons."

2) But Samuel said, "How can I go? When Saul hears of it, he will kill me." And the LORD said, "Take a heifer with you and say, 'I have come to sacrifice to the LORD.'

Here we see the Lord instructing Samuel to deceive Saul. If Samuel would have told Saul the truth, Saul would have killed both him and David. Through the lie, both men where spared and God’s plan of redemption continued.

Also consider 1 Kings 22. Prior to going to war against Syria, king Ahab consults his 400 brown-nosing prophets who basically say “you da’ man, boss!” (that’s my own translation). Unsatisfied, the king summons Micaiah. Micaiah (eventually) tells the king of his pending doom, and a bit more:

19) Micaiah said, "Therefore, hear the word of the LORD. I saw the LORD sitting on His throne, and all the host of heaven standing by Him on His right and on His left.

20) "The LORD said, 'Who will entice Ahab to go up and fall at Ramoth-gilead?' And one said this while another said that.

21) "Then a spirit came forward and stood before the LORD and said, 'I will entice him.'

22) "The LORD said to him, 'How?' And he said, 'I will go out and be a deceiving spirit in the mouth of all his prophets.' Then He said, 'You are to entice him and also prevail. Go and do so.'

And how about Rahab? We read in Joshua 2 that she lied to protect the spies. Do the Scriptures condemn her? No. Actually, because of her deception, she was included in the “Faith Hall of Fame” (Hebrews 11:31).

Conclusion: “There are No Jews Here”

The “Nazi at the door” is not a true moral dilemma—we are not actually caught between competing moral choices. As a matter of fact, God will never put us in a situation where we truly have to choose between two of His commands.

God does expect us, however, to make moral choices that are consistent with His revealed will. This means that we cannot simply stop at the summary of God’s law, but, instead, we must press on to consider the totality of what God has to say.

In our short study, we found that truth-telling is the general rule. But in certain situations (such as when protecting innocent people, or during a time of war) God allows for deception. That being said, there is something very important we must remember: Because God’s character is the standard of morality, He is the only One able to determine when deception is allowed—not us. Therefore, study the Scriptures carefully, for God takes His commands seriously.

posted by The Catechizer and The Deacon | 6:24 AM