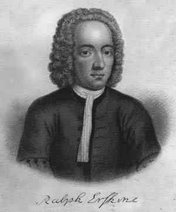 I am both a cigar and a pipe smoker (traditional pipes; not the kind that need water). I’m also a connoisseur of good, Reformed theology. What a treat it is to have these good gifts brought together by Scottish churchman Ralph Erskine (1685-1752) in Think and Smoke Tobacco. So grab your favorite pipe and read on!

Part I
This Indian weed now wither'd quite,
'Tho' green at noon, cut down at night,
Shows thy decay;
All flesh is hay.
Thus think, and smoke tobacco.

The pipe so lily-like and weak,
Does thus thy mortal state bespeak.
Thou art ev'n such,
Gone with a touch.
Thus think, and smoke tobacco.

And when the smoke ascends on high,
Then thou behold'st the vanity
Of worldly stuff,
Gone with a puff.
Thus think, and smoke tobacco.

Letter to a Christian Nation – Part 3 – The Judgment of God

If you think that Jesus taught only the Golden Rule and love of one’s neighbor, you should reread the New Testament. Pay particular attention to the morality that will be on display when Jesus returns to earth trailing clouds of glory:

6) For after all it is only just for God to repay with affliction those who afflict you,

7) and to give relief to you who are afflicted and to us as well when the Lord Jesus will be revealed from heaven with His mighty angels in flaming fire,

9) These will pay the penalty of eternal destruction, away from the presence of the Lord and from the glory of His power

If anyone does not abide in Me, he is thrown away as a branch and dries up; and they gather them, and cast them into the fire and they are burned.

In these versus we see Christ returning and bringing judgment upon His enemies. Mr. Harris seems to think that this is somehow immoral, although he doesn’t say why. The question we need to answer is, “Is God’s judgment upon men just?”

When God created man, he created him “good, and after His own image, that is, in righteousness and true holiness”; however, after succumbing to the temptation of the devil, our first parents rebelled against our creator. Because of this disobedience, “our nature became so corrupt, that we are all conceived and born in sin.” Furthermore, because of our corrupt nature, “we are wholly unapt to any good and prone to all evil.” This means that we are not only born with Adam’s guilt (because he represented us all before God), but we also “daily increase our guilt” with our own sins.

Although God is merciful He is also just, and will not allow our sins (i.e., not conforming to, or acting against, His law) to go unpunished. How can mortal man escape this just judgment? How can we sinful mortals repay a debt owed stemming from crimes committed against an infinitely holy God? How can we “escape this punishment and be again received into favor?” Answer: Satisfaction must be made, “either by ourselves or by another.”

But, because we “daily increase our guilt,” we ourselves cannot make such satisfaction. Furthermore, no “mere creature can sustain the burden of God’s eternal wrath against sin.” It seems hopeless. The only way to bridge the chasm separating us and God is to have a mediator and redeemer “who is a true and sinless man, and yet more powerful than all creatures, that is, one who is at the same time true God.” But who is such a mediator and redeemer? “Our Lord Jesus Christ, who is freely given us for complete redemption and righteousness.”

Back to God as Judge

As seen above, mankind has rebelled, and continues to rebel, against his God and has earned the Creator’s wrath. God, however, has made a way of escape—faith in Jesus Christ. By rejecting that way of escape, men will stand before the Just Judge of the Universe and give an account. Their punishment will fit their crimes; since these men can never repay the dept owed, they will bare God’s wrath for eternity. This is just. It also matches their desire—they wanted nothing to do with God, and they’ll get their wish, forever.

It would be unjust for God to simply say, “Hey, no problem. I’m a loving God. Here’s your Get Out of Jail Free card.” For example, if Mr. Harris was robbed and assaulted, and went to the police to swear out a complaint, would he be satisfied if they said, “We caught the guy, but let him go because we’re a loving police station”? I bet he would rail against such an injustice.

The truth is, if you sacrifice justice for love, you have likewise sacrificed love. Thankfully, this is a false dilemma—one does not have to be sacrificed for the other. God is both loving and just.

Mr. Harris’ complaint falls on its face because it would be unjust and immoral for God not to render just judgment—of course, the criminal always complains about the judgment against him.

If my four-year-old grabbed my truck keys and headed out for a drive to market, would the defense “Well, you do it so it must be okay for me to” be effective?

He Descended Into Hell

I believe in God, the Father Almighty, the Creator of heaven and earth, and in Jesus Christ, His only Son, our Lord: Who was conceived of the Holy Spirit, born of the Virgin Mary, suffered under Pontius Pilate, was crucified, died, and was buried. He descended into hell. The third day He arose again from the dead. He ascended into heaven and sits at the right hand of God the Father Almighty, whence He shall come to judge the living and the dead.I believe in the Holy Spirit, the holy catholic church, the communion of saints, the forgiveness of sins, the resurrection of the body, and life everlasting. Amen.

The Apostles’ Creed is one of the earliest statements of Christian orthodoxy, believed to be written sometime in the second century. Later, sometime before 700 AD, the words “descended into Hell” were added. Although it is not known who made the addition or why, there are a few theories as to the meaning.

“He descended into Hell” is preceded by “was crucified, dead, and buried.” The addition could be to further the distinction between Gnosticism and orthodoxy: Christ was a physical being Who actually died in the manner of men. He did not swoon, evaporate, or lie in a coma, but physically ceased living with His spirit returning to the Father.

The Reformers believed that this statement refers to Christ suffering the pains of Hell upon the cross. Here’s how John Calvin put it in the Institutes. . .

The point is that the Creed sets forth what Christ suffered in the sight of men, and then appositely speaks of that invisible and incomprehensible judgment which he underwent in the sight of God in order that we might know not only that Christ’s body was given as the price of our redemption, but that he paid a greater and more excellent price in suffering in his soul the terrible torments of a condemned and forsaken man.

(You can read Calvin’s entire comments on this portion of the creed here.)

Although I believe that the Reformers are correct (and when I confess this creed, this is what I have in mind), Christ certainly did suffer the pains of Hell on the cross, I’m still troubled by the use of the term “descended.” If that’s what the author of the text had in mind, why use that term? It doesn’t seem to fit.

I’ve heard two interpretations of this:

I think there are many with both interpretations (especially the second), but I’m going to pass on that in this post. Instead, I just want to focus on the passage at hand: Does it teach that he actually “descended” somewhere? I don’t think so.

In the versus leading up to this passage (particularly 18-20), Peter is encouraging us to stand strong in faith while enduring persecution for righteousness sake. Noah is an example of such courage under fire. Christ, via Noah’s preaching, is proclaiming the gospel to those living in Noah’s time—those who are now in Hell (i.e., “prison”). This is why Peter says “ . . . He went and made proclamation to the spirits now in prison”; the sequence is 1) Christ preached (they didn’t listen) 2) now they’re in prison.

It seems to me, therefore, that the context disallows the other two interpretations.

Whatever the reason “He descended into Hell” was added, what I have in mind when confessing The Creed is that Christ suffered the pains of Hell for me. Not only is this theologically supported, it also reminds me that my salvation came at a great price. May our dear savior’s name be praised forever. Amen.