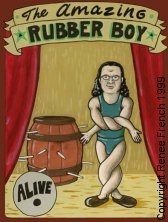 In part 1 I mentioned that for a worldview to be viably considered it must be able to make sense of reality. Atheism as a worldview fails to provide a foundation for abstract (non-material), invariant (things not given to change) entities, such as morality, mathematics, laws of logic, and propositions. Moreover, atheism fails to make sense of love and beauty, and is found wanting when it comes to accounting for the regularity of nature.

So what are we to make of it when atheists love, show compassion, demand justice, use logic and mathematics, and engage in the scientific enterprise? Like a drowning man denying the existence of water, they must assume the Christian worldview in order to refute it—for it is Christianity, not atheisim, that comports with reality.

Like the previous post, this is just a thumbnail sketch (and we still didn’t have room to talk about love and beauty)—but at least it’s a start. All claims to explain reality must be scrutinized, including atheism. The ball’s in your court, Penn.

posted by The Catechizer and The Deacon | 4:09 PM

The Catechizer and The Deacon said...

Thanks, Doug. The irony is that I was listening to you today on my iPod talking about Aquinas with the Apologetics.com folks.