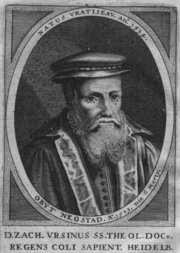 Zacharias Ursinus (1534 – 1583), primary author of the Heidelberg Catechism, on the law-gospel distinction …

The doctrine of the church is the entire and uncorrupted doctrine of the law and gospel concerning the true God, together with his will, works, and worship …. The doctrine of the church consists of two parts: the Law, and the Gospel; in which we have comprehended the sum and substance of the sacred Scriptures …. Therefore, the law and gospel are the chief and general divisions of the holy scriptures, and comprise the entire doctrine comprehended therein …. For the law is our schoolmaster, to bring us to Christ, constraining us to fly to him, and showing us what the righteousness is, which he has wrought out, and now offers unto us.

But the gospel, professedly, treats of the person, office, and benefits of Christ. Therefore, we have, in the law and gospel, the whole of the Scriptures comprehending the doctrine revealed from heaven for out salvation …. The law prescribes and enjoins what is to be done, and forbids what ought to be avoided; whilst the gospel announces the free remission of sin, through and for the sake of Christ …. The law is known from nature; the gospel is divinely revealed …. The law promises life upon the condition of perfect obedience; the gospel, on the condition of faith in Christ and the commencement of new obedience.

Commentary of the Heidelberg Catechism

If [one’s] conscience has really been quickened by the power of God’s Word and Spirit, it cannot be pacified buy by the simple faith of Christ. The power of God’s law is such that nothing else can meet it but the power of Christ’s Gospel. A sense of God’s wrath in the conscience can only be allayed by a view of God’s reconciliation in the cross. Man’s inventions, man’s instrumentality, man’s authority, are nothing in such a case, and have no power; they may palliate, but they cannot cure the agony of a wounded spirit, —they may perplex, they cannot pacify a troubled conscience. None but CHRIST, beheld by the eye of faith, in the glory of his divine majesty, the tenderness of his human sympathies, the fullness of his gospel offices, the perfection of his finished work, the efficacy of his one atonement and constant intercession, the greatness of his Almighty power, and the riches and freeness of his grace. None but CHRIST, and Christ without any other, can bind up the broken-hearted, and give liberty to the captive soul.

Deck Thyself, My Soul, With Gladness 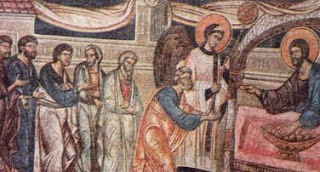 Deck thyself, my soul, with gladness,
Leave the gloomy haunts of sadness,
Come into the daylight's splendor,
There with joy thy praises render
Unto him whose grace unbounded
Hath this wondrous banquet founded;
High o'er all the heavens he reigneth,
Yet to dwell with thee he deigneth.

Jesus, Bread of life, I pray thee,
Let me gladly here obey thee;
Never to my hurt invited,
Be thy love with love requited;
From this banquet let me measure,
Lord, how vast and deep its treasure;
Through the gifts thou here dost give me,
As thy guest in heaven receive me.

The Holy Spirit ordinarily uses the Word to give repentance towards God and faith towards our Lord Jesus Christ. The four main centers of life affected by repentance and faith may be said to be the mind involving knowledge, the conscience involving conviction, the heart in involving feeling, and the will involving decision, and these four are exercised throughout the whole of the Christian’s life on earth.

Dr. Peter May has a fine article at bethinking.org titled, Has Science Disproved God? In it he fortifies the Cosmological argument with scientific discovery.

I do have one disagreement, though. In his article, Dr. May suggests that time is a created thing:

We cannot speak about time before time existed. God, if he created the universe, must live outside of space and time.

Time as the Movement of a Clock

For scientists such as Einstein or Hawking, time must be physical because their worldview rules-out the existence of abstract entities. Therefore, they ascribe a beginning to time and describe it as, basically, the movement of the hands of the clock.

Christians too typically fall into this line of reasoning when they speak of God being “outside of time.” Time is seen as a creation of God that will someday be done away with. Until then, He will content Himself with being a sort of jack-in-the-box, jumping in and out of this box called “time.”

Another Christian explanation of God and time, sometimes called “eternal now,” was held by many of our Church Fathers, including Clement of Alexandria, Tertullian, Origen, and Methodius.

This view puts God in a window overlooking a parade—the ever-present spectator, God is perched high-above observing all events at once. Consequently, the creation of the earth, the crucifixion of Christ, and the consummation of the age are all happening at one time. As if all events were thrown into a cosmic Cuisinart.

There is certainly a created aspect of time. But is it exclusively so? I don’t think so. There seems to be an uncreated element that is a necessary consequence of God’s existence. Consider this: Time is usually defined as duration—that which passes between events. It seems to me that there is something else to consider: sequence, which includes the events themselves. Here’s what I mean:

There are two types of sequence: logical and temporal. An example of a logical sequence would be counting, 1, 2, 3, 4, etc. “2” logically follows “1.”

A temporal sequence would be a simple recounting of events. For example, if I numbered four Popsicle sticks and then randomly laid them out, they might turnout like this: 4, 2, 1, 3. That’s a temporal sequence.

Here’s something else to consider: before that creation, God created a certain number of angles; and before He created them, He set a fixed number in His mind. This involves counting—logical sequences. Since God is not material, and since He is counting and creating, then neither logical nor temporal sequences are material; and since they necessarily precede His creative work, they themselves cannot be created; hence time cannot be material nor created.

Every Christian I’ve discussed this with has simply assumed that time is created and have offered no arguments for time’s creation and no valid refutations to my argument regarding sequences and time markers.

For those espousing the “time is a created thing” position, please tell us why we should accept your position? Why should we believe that before God engaged in His creative handiwork that He didn’t think (was He comatose?), plan (e.g., when would the consummation of the age be), add (e.g., establish the number of angels He’d create), love (inner-Trinitarian), etc.? Why should we believe something that is obviously self-refuting: that before before there was no before? Why would we believe that right now, to God, He is talking to Moses, bringing the plagues upon Egypt, being crucified in the person of Christ, bringing about the consummation of the age, ect?

What those of us who are skeptical of this position are looking for is a rational argument for time being created and not applying to God. (I'd also appreciate a refutation of the argument I've offered.)

It is a difficult issue, and highly speculative and mysterious, and we must take care not to create new mysteries. Those of us with these questions could be completely wrong about this, but to know that we are, we're going to need a valid argument (not an assumption) that time is a created thing. 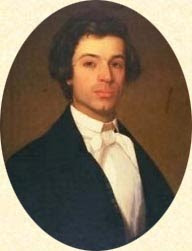 Oh! The selfishness of the thought that restricts prayer to mere petition! Shall nothing drive us to God but the pressure of want! Shall we think of him only when we are hungry, and forget him when we are full? Must the sense of guilt be always required to sting us into the presence which we seek only to obtain the relief of pardon? Is there nothing attractive in the character of Jehovah himself to draw us with the power of a magnet?

Surely it is a dull heart which does not warm to the beauty which he discloses, and whose impulse is not to utter its joy in these ascriptions of adoration and praise. What can be a worthier use of the faculty of thought and feeling than to employ them in the worship of the august Creator? Or what nobler employment of the tongue, the glory of our frame, than to articulate his praise in the loftiest language which sanctified beings can inspire?

Jehovah may always be adored, for he is unchangeably worthy of the homage. This, therefore, is part of prayer independent of the shifting frames by which we are so often painfully embarrassed. Whatever our condition—whether filled with peace and believing, or mourning and darkness of soul—whether tender in penitence, or dull in the apprehension of sin—whether aching with ungratified desire or overflowing with gratitude for blessings bestowed—God is always before us in the fullness of his glory to challenge our worship.